Acer reveals 'floating' screen to save desktop, self

Is it an all-in-one? Is it a notebook? Is it a tablet? 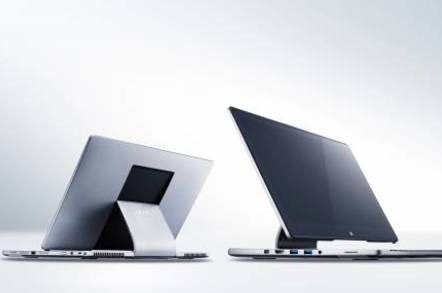 Taiwanese hardware giant Acer has made a bold bid to claw back some of the market share it’s been hemorraghing over the past few months, taking the wraps off the Aspire R7 – a tablet/notebook/desktop hybrid device complete with “floating” touchscreen.

The R7’s main talking point is what Acer has dubbed the “Ezel hinge”, which allows the user to pull the 15.6in FHD 1920x1080 display up and out from a regular notebook position to turn it into an all-in-one desktop form factor.

The display also folds down to turn the R7 into a chunky tablet, or can be flipped up into “display mode” to watch video content.

Inside the aluminium unibody is an Intel Core i5 processor, up to 12GB of memory and a choice of a 1TB spinning rust disk or SSD up to 256GB.

Rather unusually, the computer's trackpad has been placed close to the screen with the backlit keyboard pushed right to the edge, which may take some getting used to. At a hefty 2.4kg it’s not the most portable of beasts.

However strange its design sounds, Acer needed to do something to turn heads after the once-dominant notebook player’s turnover collapsed 20 per cent year-on-year in the final three months of 2012 to NT$101.5bn ($3.41bn, £2.25bn).

In APAC, performance has been even worse recently, with the firm recording a year-on-year decline in sales of 35 per cent in the first quarter of 2013.

At the Aspire launch event in New York last Friday, the Taiwanese hardware biz also made a play for the corporate market with the new Aspire P3 ultrabook.

The touchscreen notebook/tablet hybrid was touted as a “productivity powerhouse” for mobile workers, available with Intel Core i3 or Core i5 processors and offering battery life of up to six hours.

The Windows 8 machine comes in at 0.77in thick, but at a rather heavy 1.4kg, may not be enough to win over corporate users, especially as it appears to borrow heavily from the Iconia W700 launched at Computex last year.

Vulture South will be at Computex this year to see if Acer has any more surprises up its sleeve, given that the show is likely to be dominated by the launch of Intel’s much-anticipated Haswell chips.

The Aspire R7 will begin shipping in June, while the P3 is set to start rolling off the production line this month. ®