It was three years ago today... 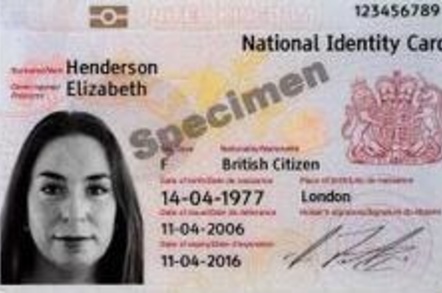 In the general election held three years ago, every party except Labour and the Monster Raving Loony Party (which just may have been having a laugh) had ID card abolition in their manifestos, including the Conservatives, Lib Dems, Scottish Nationalists, the Pirate Party, Cornish separatists Mebyon Kernow and the BNP.

But Labour stuck to the national identity scheme even after the election, as it negotiated with the Lib Dems over whether they could form a coalition. Its insistence on doing so contributed to the failure of those negotiations – although did Harriet Harman’s failure to know that one of the Lib Dem negotiating team was also its home affairs spokesperson probably didn’t help. (Chap by the name of Chris Huhne, who has since gained extensive experience of how policing, the legal system and prison works. )

Researching the recent history of ID cards in Britain for my book Card declined has led me to some conclusions.

While civil servants may promote something like ID cards, in the end it is ministers who make it happen – such as home secretary David Blunkett, lobbying for ID cards on the evening of 12 September 2001, according to Alastair Campbell’s diaries.

Secondly, democracy has a habit of getting to the right answer, but this also often means working through the wrong ones. Often at length.

Finally, ID cards have an ability to tar any nearby politician with lashings of farce. Wartime identity cards, retained by the Labour government of 1945-51, were abolished by Winston Churchill’s Conservative government, but only after an energetic campaign by Liberal politician Clarence Harry Willcock, after he was nicked for speeding on Ballard’s Lane in north Finchley. One PC Muckle demanded to see Mr Willcock’s identity card. Mr Willcock refused, saying splendidly: “I am a Liberal, and I am against this sort of thing.” He took the case to the High Court, lost, but won a change in the law. (There’s more in this PDF taster of Card declined. )

The same has been true more recently.

Conservative plans for identity cards in the 1990s were found by the Guardian in a government surplus filing cabinet, bought in a junk shop in Camden for £35. Two of the Labour home secretaries who developed the scheme left office after oddly appropriate scandals: Mr Blunkett in a row over the alleged expediting of a visa for the nanny of his former lover; and Jacqui Smith over an expenses claim for two £5 pay-per-view adult films watched by her husband, along with Ocean’s 13 (£3.75) and the family animated comedy Surf’s Up (£3.50). And then there was ‘identity minister’ Meg Hillier, who turned up in Liverpool in 2009 to promote the scheme… having forgotten her ID card.

The wave of farce hit opponents of ID cards as well as advocates. In 2009, David Cameron, who opposed the scheme from 2004, got into a spot of bother over using a dodgy German accent to explain how the scheme would introduce a ‘papers please’ culture of law enforcement.

Damian Green, the minister who got the fun job of abolishing the scheme, looked like an assassin in hi-vis in 2011 when stuffing the drives into an industrial shredder – although I will always be grateful to him for fronting what was the most enjoyable press event of my career. ®

This is an extract from SA Mathieson’s book, Card declined: how Britain said no to ID cards, three times over, available in e-book for £2.99 (PDF or Kindle) or in print for £4.99. Click here for more in the series.