Google to Glass devs: 'Duh! Go ahead, hack your headset'

'We intentionally left the device unlocked' 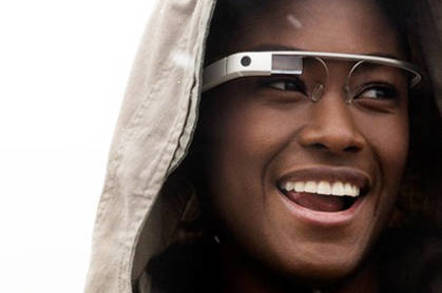 Google might not want people selling its Google Glass Explorer Edition high-tech specs, but it has no problem with developers hacking on the hardware and software, if recent developments are any indication.

The Chocolate Factory released the GPL-licensed portions of the source code to the software that powers Glass over the weekend, mere days after an independent developer announced that he had discovered an easy way to jailbreak the device.

On Friday, Forbes reported that Android and iOS developer Jay Freeman, aka "Saurik", had managed to unlock his Glass specs in about two hours – all, he said, while he was having dinner with friends.

The technique he used was a common one that works on a variety of Android devices, which involves tricking the OS into thinking it's running inside an emulator for testing, rather than on actual hardware.

Freeman told Forbes that he wasn't sure just what getting his Glass specs into this unlocked mode would actually allow him to achieve. But now that Google has made the Glass source code available, it should be possible to build custom firmware images for the device, as the Cyanogenmod project does for phones and tablets.

Not that any of this came as a surprise to the group developing the futuristic eyewear at Google, however. On Friday, XML co-creator and Google developer advocate Tim Bray gave a public roll of his eyes on Twitter:

Google X Lab developer Stephen Lau elaborated on his Google+ page, to the effect that when a company like Google releases a device that's intended exclusively for developers, nobody should be surprised when that device proves to be highly hackable:

Not to bring anybody down... but seriously... we intentionally left the device unlocked so you guys could hack it and do crazy fun shit with it.  I mean, FFS, you paid $1500 for it... go to town on it.  Show me something cool.

As far as what that "something" might be, the options are wide open. Also on Friday, Jay Lee, another early Glass developer, managed to extract some of the hardware specs of the device, and he found it to be a fairly capable piece of kit.

The Explorer Edition devices are powered by a Texas Instruments OMAP 4430 processor, which features dual ARM Cortex-A9 cores coupled with an Imagination Technologies PowerVR SGX540 GPU. Ordinarily these chips run at between 1 and 1.2GHz, but it wasn't immediately clear whether Google might have throttled down their clock speeds to give Glass longer battery life.

In addition, Lee found that his Glass headset reported 682MB of RAM, though he suspects the actual number is probably 1GB, part of which is being reserved for system use.

All in all, those specifications mean the Glass headgear – which runs Android 4.0 "Ice Cream Sandwich" – is actually more powerful than many Android phones, 40 per cent of which are still running Android 2.3 "Gingerbread."

That should allow developers to create a wide array of interesting apps for the system – provided, that is, their creations don't involve driving, going to strip clubs, or drinking beer. ®