You hear that, Mr Cook? Samsung's profits have gone UP

Remember when Apple's used to do that? 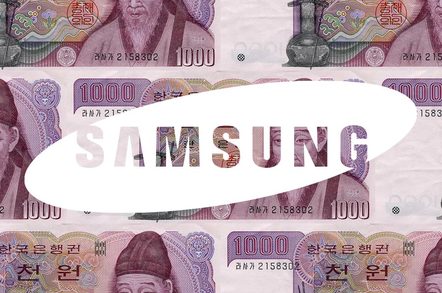 Samsung Electronics is toasting a massive hike in its Q1 profits fuelled by sales of smartmobes and tabs but warned cheaper kit flooding the market may "dampen" its next quarterly numbers.

The South Korean firm's figures make for uncomfortable reading for Apple CEO Tim Cook as his company's fortunes start moving in the opposite direction.

In a canned statement, however, Samsung said "we may experience stiffer competition in the mobile business due to expansion of the mid- to low-end smartphone market".

The quarter "proved trying" for the PC business - the company is not alone here - and the global expansion of LTE networks lifted earnings for the Network Business by upping supply of 4G wireless gear.

Samsung reckons its tonic for "lacklustre" PC demand is to shift the product mix to mid- and high-end configurations.

"Prospects for the PC DRAM market are uncertain as tighter demand and narrower market size weigh on suppliers," said Samsung.

The Consumer Electronics division reported sales of 11.24tn won (£6.5bn) with TVs showing modest growth on a year ago.

Samsung's spokesman said in the statement: "Although market uncertainties from the European crisis and the slow global economic recovery are still lingering, we expect to increase R&D spending for strengthening our competitiveness ahead of planned new product launches". ®