Swings to a loss in Q1 as R&D, sales, and marketing costs rise 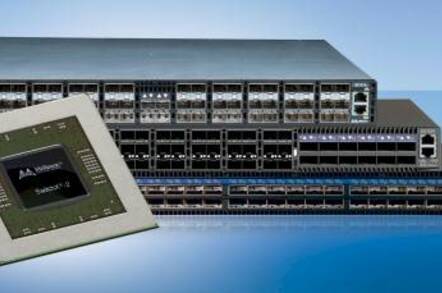 Mellanox Technologies reported its first quarter financial results today, and Eyal Waldman, chairman and CEO at the networking chip and switch maker, said in a conference call that the company had taped out its first experimental chip that would run at 100Gb/sec and support the future Enhanced Data Rate (or EDR) version of InfiniBand.

The first test chip, which will tape out in the second quarter, is based on 20 nanometer wafer-baking technology and will presumably be called SwitchX-3, the next bump up from the SwitchX-2 ASICs that are used inside of its 56Gb/sec InfiniBand and 40Gb/sec Ethernet products. The Switch-X ASIC is so named because it can switch between supporting the InfiniBand or Ethernet protocol.

Waldman said that Mellanox might do two or three test chips for the EDR-capable SwitchX-3 chips, testing different elements of the architecture, and added that the plan was to get EDR products into the field in 2014 or 2015.

During the first quarter ended in March, Mellanox did one tape out, for the chips used on its ConnectX-3 Pro host bus adapter cards, which just launched and which will be available in May. Waldman said that the company would do two more tapeouts this year, but did not elaborate on what they would be for. (Presumably more EDR test chips, but perhaps a tweak to existing FDR ASICs is in the pipeline.)

In the first quarter, Mellanox saw its sales dip 6.38 per cent, to $83.1m, and as R&D costs jumped by nearly a third and sales and marketing costs rose by nearly as much, the company swung to an $8.5m loss compared to a $12.4m profit a year ago.

About half of the $30m in excess inventory at one of its dominant partners that caused Mellanox so much heartburn in its fourth quarter has burned off. Mellanox has never identified the customer that bought so much product, but it is likely to be IBM, Hewlett-Packard, or Oracle.

The important thing as far as Mellanox is concerned is that the company continues to buy other Mellanox products as it burns down its inventory. El Reg has to guess here, but it seems likely that one of these companies bought a whole bunch of 40Gb/sec InfiniBand products and then some deals didn't work out for that vendor and they were left sitting with server adapters, switch ASICs or whole switches.

Networking chip and server adapter boards together accounted for $34.9m in revenues, or 42 per cent of the revenue pie, while switches (both InfiniBand and Ethernet) brought in $35.7m. The rest is software, cables, and other stuff.

Mellanox has been selling Ethernet switches for years now, and this is still a relatively small part of its business, making up only 9 per cent of overall sales, or about $7.5m in the most recent quarter.

"The start of this year has been challenging both for Mellanox and for the industry as a whole," Waldman said on the call, but, he added, the company expected to see sequential revenue growth as the year progresses and that is a whole lot better than seeing revenues decline. ®