Samsung vs Apple: which smartphone do Reg readers prefer? 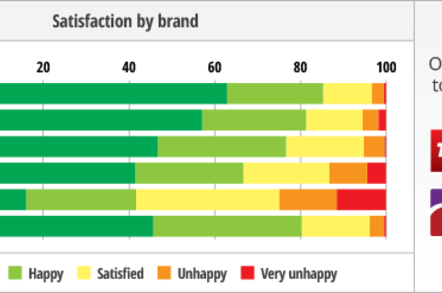 Promo Reg readers feel strongly about their smartphones. This much was clear when Freeform Dynamics analysed the results of a recent research study looking at Reg readers' habits and activity with respect to smartphones, tablets, TV viewing and electronic gaming (discussed in a previous article),

The top three brands in terms of the number of smartphones used were Samsung, Apple and HTC respectively, but BlackBerry and Nokia also put up a reasonable showing. 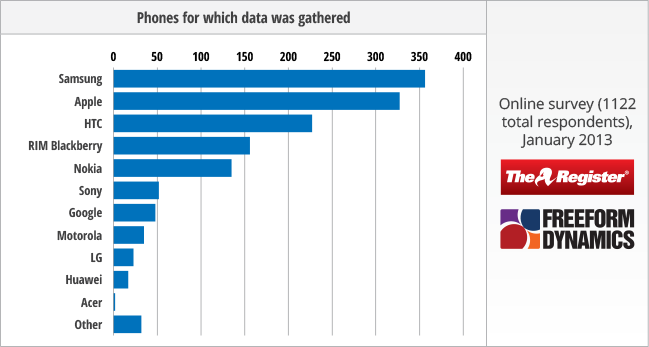 This picture is consistent with the smartphone market broadening rapidly over the past couple of years, with the days of absolute domination by Apple, in the high-end consumer segments, and BlackBerry, in the enterprise, truly behind us.

Today, there is a lot of choice for both consumers and business people - indeed it's hard to keep up with the rapid introduction of new models by mainstream players.

In light of this, we deliberately pitched the questions in this survey at a brand level so we could capture the readers’ general sentiment towards manufacturers, rather than try to unravel the detail at a handset level. Even since this research was carried out in January 2013, for example, we’ve seen the launch of the Blackberry Z10, the announcement of the Galaxy S4 and HTC aiming to make more of an impact with the HTC One.

In terms of brand satisfaction our respondents were in the overwhelming majority of cases either happy or very happy with their smartphones, with Samsung users coming out as the most satisfied overall, and Apple in second place.

We can also see from this chart, in which percentages relate to individual user bases, that BlackBerry users were the least satisfied out of the top five brands, though the jury is still out as to whether the Z10 will change this. Unsurprisingly, looking behind this chart, those with high-end devices were more satisfied with their smartphones than those with entry-level equipment.

So, will Reg readers buy the same brand of smartphone again or will they go for a change? Some 86 per cent of Samsung smartphone users think they’ll sticking with the brand, compared to the 71 per of Apple users who plan to remain faithful to Apple.

Do we detect an Apple boredom factor creeping into the Reg readership here? Although iPhone users are not unhappy per , perhaps the recent lack of 'change everything' developments means that Apple is no longer satisfying the desire for new and exciting things that attracted users to the device in the first place

The modest advances in capability between the iPhone 4s and iPhone 5 won’t have helped here, but it remains to be seen if this is the beginning of a trend towards the iPhone as "just another smartphone". With the market changing so rapidly and new phones being introduced on a regular basis, only time will tell.

So what are your thoughts on the state of the smartphone market? Are you a dyed in the wool Apple user looking forward to the iPhone 5s, 6, and onwards, or as the market has developed have you broadened your horizons?

And what about you Samsung fans – is the S4 enough to keep you faithful, or is the latest bling from HTC, BlackBerry and Nokia tempting you to stray?

We’d like to hear from you on these questions in the comment box below - along with any other feedback you have that’s likely to affect your next smartphone decision. ®