Wrap THIS round your appendage, Cupertino 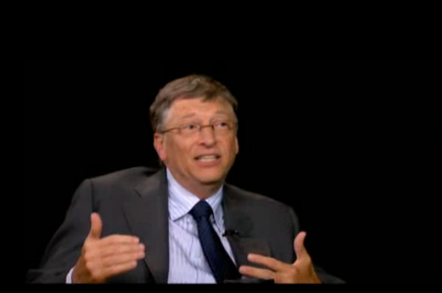 Microsoft is working on a touch-enabled watch despite calling time last year on its earlier efforts. The revelation comes hot on the heels of rumours that rival Apple is working on an iWatch - which were further fuelled by Cupertino's posting of a job ad for a flexible display expert.

The Wall St Journal reports that Microsoft is working on device designs and has asked component suppliers in Asia to supply the requisite pieces. The paper said an unnamed exec had claimed to have met with Microsoft's research and development team in Redmond, Washington.

The news comes just over a year after Microsoft pulled the plug on its Small Personal Objects Technology (SPOT) watches, launched by Bill Gates in 2003.

SPOT watches didn't sell in big enough numbers despite some sterling and polished support like this from Bill Gates, temporarily famous The OC actress Mischa Barton and Swatch CEO Nick Hayek. Sales for watches were eventually discontinued in 2008 and the MSN Direct service was turned off by Microsoft in January 2012, rendering useless any SPOT watches actually out there.

A year on, however, Apple has started to lend the smart-watch space some Cupertino-style cred. The WSJ reported in February that Apple's iPhone and iPad manufacturing partner Foxconn was working on a spate of technologies that could be used in "wearable devices" such as the rumored iWatch. The New York Times reported that the iWatch itself is an iOS-based device, constructed of curved glass that wraps around a user's wrist.

The expectation is Apple could do for watches what it did for smartphones and tablets.

An Apple smart watch would be a bitter pill for Microsoft to swallow, marking the second time Apple had swiped the baton from Redmond on an idea championed by Gates.

In 2001, Gates unveiled Windows XP Tablet PC Edition claiming the Microsoft Tablet PC would become the most popular form of PC within five years. Tablets, though, would remain nothing more than niche computing devices used in vertical sectors such as transport and logistics, while Windows XP Tablet edition dropped off Microsoft's development and support radar.

But it was Apple's iPad in 2010 that was the tablet game-changer, breaking into the consumer mainstream and prompting what seems to be a fundamental shift in people's PC buying habits, as PC sales tumble. Microsoft has since been forced to follow with Windows 8 touch for PC makers' tabs as well as its own Surface fondleslabs. ®