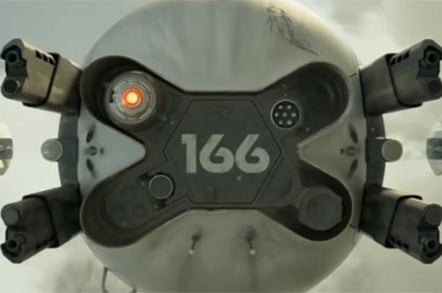 When the film Oblivion was mentioned in the office recently, my first thoughts were that it was a prequel to The Hangover series. I couldn’t have been more wrong... or was I? After all, this Tom Cruise sci-fi caper has loss of memory as one of its key themes, which, booze fueled forays aside, immediately has me thinking of some Philip K. Dick story being reworked, but more on these parallels later.

Room with a view: the Sky Tower

Cruise plays Jack Harper, a drone repair man on a post-nuclear Earth. He lives in a Sky Tower miles above the surface with his female comms officer, Victoria, played by Brit Andrea Riseborough, who starred as Wallis Simpson in Madonna's biopic W.E. Victoria can’t wait for the next two weeks to be over as they’ll be off the planet and on the Tet space station where sci-fi Skype buddy boss Sally controls operations from. And then on from there to Saturn's moon Titan, where Earth's population evacuated to.

The communications desk: you'd think this stuff would be less complicated in the future

“Are you an effective team?” Sally asks Victoria as they close each conversation. It’s an eerie question but Victoria is happy to parrot, “Yes, we are an effective team”. But you don’t know Jack. His dream life is troubling him as the woman he shares his shack in the sky with is not the one who visits him every night when he’s asleep. That would be Julia, played by Olga Kurylenko. Most of us will know her as the Bond girl from Quantum of Solace.

So why does a ravaged planet need a drone repair man, let alone drones, in the first place? Jack describes the partnership as a “mop up crew”, maintaining these heavy artillery airborne beasties that protect vast hydro stations dotted around the planet that suck up water for the Tet. The drones need military might as they are attacked by Scavs, an alien species, apparently, that were the cause of all these woes in the first place. Jack wonders why they're still there some sixty years on. They destroyed our moon and buggered up our tides and weather systems in the process. Bastards!

CGI hydro stations, the rest is shot on location at Earl's Peak, Iceland

Talking of bastards, I only recall hearing “shit” in the movie, but there is stronger language used – a full breakdown for parents here. As it’s a 12A, it does keep the carnage and canoodling at bay, compensated by pyrotechnics aplenty. Oh, and talking of the moon too, I was barely five minutes into the film when I thought about Moon: maintenance guy with not long to go before a contract ends. Does that sound familiar?

Thoughts of Moon occurred a few times for other reasons, but I’ll say no more as Oblivion has none of the claustrophobia of Bowie Junior’s directorial debut. Quite the opposite, in fact, as writer/director Joseph Kosinski of Tron: Legacy fame, had quite a vision for this work.

It might not fly, but they built a full-size Bubbleship

Kosinski went to great pains to get as much of the action in-camera, going so far as to build a full-size Bubbleship – looks like a Fenestron Eurocopter with a jet pack – with another cockpit-only model chucking Cruise and Kurylenko around on a gimble. The Sky Tower set was also surrounded by projection screens of sky, cloud, sunrise, sunset and stars from footage the director had shot for the purpose on three cameras set up nearly two miles above sea level on Haleakalā, a volcano in Maui.

It would be a bit too much of an exaggeration to say the effect is ‘stunning’. We all know what the sky looks like, after all. Instead, it’s just very natural, as the set is lit by these projections. Hence, on this set all the reflections get the skyscape too, there’s no major green screen hell here for the actors and compositors to deal with. Kosinski was also keen to make this a “daylight” sci-fi flick and chose Iceland’s terrain and seasonal all-day sunshine as the main outdoor location.

So why has Jack got memory problems? The preamble at the beginning explains that five years ago, he had a mandatory memory wipe for security reasons. Sounds a bit fishy to me. And early on, when things drag over a meal as the unconvincing relationship with Victoria unravels, an uneasiness takes hold as you wonder if she knows more than she’s letting on.

The ruins of the last Superbowl site: so there is hope for the future

Jack’s memory is frequently triggered by his travels that take him to ruined sites from an America past, among them the 2017 Superbowl Stadium – the last ever game. We should be so lucky. Doing the rounds one day, Jack spots a vessel descending to Earth and, against protocol, goes to investigate. It’s in the trailers so it’s no great spoiler to say that here he finds the girl of his dreams and she knows his name too. Struggling with flashbacks and her familiarity with him, it’s like Paycheck meets Bladerunner meets the old world set of Logan’s Run and Planet of the Apes.

So what happens next? Well, those Scavs are getting up to all sorts of tricks, pinching power units from drones to blow up installations and making things difficult for Jack. Having dream girl Julia around doesn’t go down too well with Victoria either, so there’s trouble brewing on all fronts. “Are we an effective team?” Now there’s a question.

Needless to say, there’s plenty of superlative CGI in the Bubbleship and droid dogfight action, as Jack transgresses from his normal duties, gripped by a need to understand what’s going on in his world. And he’s not the only one. Mystery man Morgan Freeman’s soft delivery of essential backstory elements makes you wish there were subtitles at times. And where did he get that cigar he fires up as he makes his entrance? Surely, this fiery post-nuclear Cuban missile would be a stale old turd by now.

Tobacco: a universal constant in any sci-fi century

So does this movie have a similar whiff about it? Well it's doubtful if it will be hailed as a sci-fi classic, but it's still an entertaining enough romp. The fragmented lives aspect of the storyline makes it more difficult to feel any warmth for the female characters given their spooky ways, but it remains nevertheless intriguing, even if you're not exactly rooting for Cruise, Kurylenko and co. Still, their performances are convincing although Morgan Freeman doing his stereotypical wise old man routine shows rather unimaginative casting.

In the closing sequences, bringing all the pieces together does seem a bit rushed, like winding up a Dr Who plot. The film eventually gives up its secrets by introducing some flashback elements that join the dots in a way that doesn’t suggest that this is simply an aliens v. humans battle built around pre-owned ideas. Its certification also means that wee ones probably won’t be crying themselves to sleep, but you might if they persuaded you to buy them drinks and popcorn from the foyer. ®

In cinemas across the UK this April, check out trailers and cast on the official Oblivion movie site.

Trips to the bogs spark suspicions during contest