In 8GB of RAM and 256GB flash. And don't mention the Bluetooth

Hardware where it counts

Developers are unlikely to care much about what is installed, since it is easy to add and remove packages and every individual has their own favourite or necessary tools. Still, the lack of documentation is an annoyance. George points me towards the discussion boards. "We've got the forums going. We would like to get more information out, but the idea is to get it out there as soon as possible and then iterate, filling in some of those gaps," he said.

What counts for more is whether the hardware works correctly, since getting devices to work under Linux is often a challenge. The news here is mixed. On the plus side, the machine is usable out of the box; more than that, it is quick and responsive. The display is excellent (glossy screen aside), the audio works, Wi-Fi connected first time. Even the function keys along the top work for things including disabling wireless, controlling brightness, and playing and pausing media players. I could not resist installing Valve's gaming platform Steam for Linux, which runs perfectly after a bit of fiddling with dependencies. 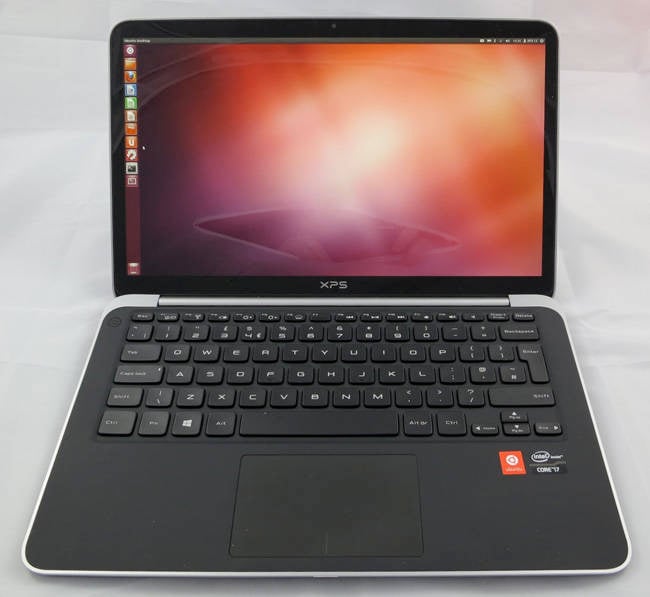 This is not a review of Ubuntu 12.04 (and note that 13.04 will be released this month), but I will note the joy of finding Libre Office installed and being able to start typing notes for this review immediately. I also appreciated Ubuntu One, the cloud-storage service with 5GB free of charge, which is prominent out of the box, and the absence of any and all OEM crapware. Workspaces, which let you switch between four desktops, are another excellent feature, which Windows lacks.

That said, I had my share of things that do not quite work; and yes, the first thing I did was to install all available updates. Shutdown can be problematic; sometimes it shuts down, sometimes it only logs out. Hibernation fails with a "device failed to thaw" error message. I had no success with Bluetooth; neither a keyboard nor an audio streamer would connect. Perhaps the biggest annoyance was when I connected a Canon camera and got the error message "unable to lock camera" and no access to my pictures.

But such is Linux, free and open-source. In my experience, most problems of this kind can be solved with sufficient effort and patience in trawling through forums or studying logs. Still, it is not quite the first-class experience I was hoping for.

Is this the perfect developer laptop? That's the intention. "We really believe that developers are the kingmakers, driving purchases in the IT space," George told me.

The SSD is only 256GB, and if the intention is that you develop cloud applications with multiple virtual machines that seems limiting, as does 8GB RAM, although USB 3.0 means you can attach fast external storage easily. "We're looking at other versions, a beauty and the beast lineup, where the XPS 13 is the beauty and we get some huge 32GB monster for real heavy-duty developing," said George.

It is a shame Dell offers no customisation options for the XPS 13 in its Linux edition, although you could get the cheaper lower-spec Windows version (Core i5 with 128GB SSD), install Linux and take advantage of Dell's driver efforts.

You would think that using free software would mean a lower price. The same-spec Windows version is £1,079, and the Linux edition is £1,078.80. The reason for the tiny differential, according to Dell, is that the Developer Edition comes with Pro support, versus Premium support for Windows.

While I doubt this will excite most programmers, the fact that it is supported at all is a big deal, since if you buy a Windows laptop and use with Linux, you will not get any joy from the supplier when trying to get Bluetooth working.

The XPS 13 Developer Edition and Project Sputnik represent a worthwhile effort but one that is currently half-baked, and given its slow progress it is hard not to be sceptical about whether it will ever come together as intended. What you do get though is a classy notebook on which Linux is fully supported, and for developers or any Linux user that is a significant benefit.

You can get your XPS 13 Developer Edition here. ®