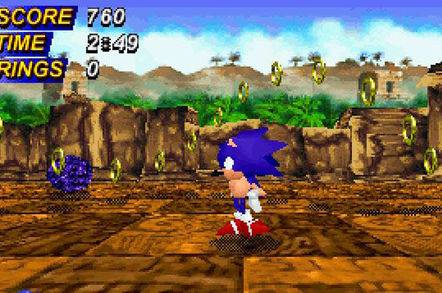 Antique Code Show Pocket-money saved, game ordered, wait for the postman and... nothing. A friend had the game already – rubbing salt into the wound – yet my journey of anticipation home from school each day still arrived at a big hole of spiky blue hedgehog nothingness. The original Sonic the Hedgehog was especially hyped throughout its long development, intensifying this cruel slice of adolescent misery, and when the blessed game did turn up, two weeks late, the cartridge was a dud.

Oh videogame Gods, what had I done wrong? And more importantly, have you punished that grey-importing bastard of a dealer yet?

Sonic original: the first in the series

In any case, that first Sonic game was a pivotal moment. Sega had found itself in a bit of a predicament: while it had a great new 16-bit console - the Megadrive; Genesis in the US - with which to take on the might of the all-conquering Nintendo, it had no mascot to drive home sales in the US and European markets.

A crack team of Sega’s best designers - ‘Team Sonic’ - was assembled, and lead game director Hirokazu Yasuhara even put off a transfer to America in order to finish the game. Yes, they pinched Mario’s coins and replaced them with rings, and certainly took a few more sneaky sideways glances at Nintendo’s plumber, but what they came up with was a more arcade-like, spontaneous and immediately gratifying title that, for the time, had kids’ eyes popping out with its multi-coloured, cartoon-like graphics.

One of the Megadrive chipset’s star qualities was its smooth backdrop scrolling. Indeed, parallax scrolling, where numerous background layers move at different speeds, was a common feature of Megadrive titles, creating a strong illusion of movement. Nevertheless, Sonic’s programmers took scrolling to the next level, with scenes flying by at lightning speed – certainly impressive for the time.

From near death to victory

Ingeniously, Sonic the Hedgehog would regularly allow players to choose their own preferred route, with hidden bonuses and ring collections along the way. Sonic had very simplistic controls: each of the Megadrive’s three buttons would send him into exactly the same jump/spin-attack. Whether this was a deliberate goal for Sega or not, such simplicity helped the title appeal to new and novice gamers, without discouraging more experienced players either.

Power-ups like a protective orb, or temporary invincibility, assisted Sonic en route, and if you could snag a pair of jauntily buckled running boots the extra speed would see Sonic bouncing around levels like a supercharged pinball – opening up sections inaccessible at standard speeds. Fake and breakable walls, springs hidden in trees and secret platforms were all part of the expert Sonic player’s remit.

Bonus levels – “Jump into that giant golden ring, quick!” - saw Sonic racking up points inside a strangely hallucinogenic dream machine. Here you were on the hunt for the elusive ‘chaos emeralds’ – seven in total – which you needed in order to complete the game fully, and beat Dr. Robotnik, Sonic’s slap-head lardy nemesis. This git would turn up periodically in some kind of egg-related death machine, looking like a dodgy perv who locks up small helpless animals for fun. Well, looks weren’t deceiving, since that’s exactly what he had been doing, which explains why cute little bunnies and chipmunks scurry away to freedom every so often. Retro Sega fans might even notice Flicky, the flightless bird, making a cameo appearance after his 1984 arcade outing.

Sonic the Hedgehog undoubtedly raised the bar for consumers’ expectations of a home platform game, yet on playing it again, the slap round the face of that “game over” screen really struck me: this title is from the old-school of try, try and try again gaming. Still, those were the times and Sonic was an instant hit; arguably, no home videogame had yet presented such a child-appealing combination of sweetly colourful visuals and glorious pop-audio.

So Sega had its mascot, and cashed in straight away with versions for the 8-bit Master System console – now looking rather long in the tooth – and its portable equivalent, the Game Gear. Knowing the marketable value of its new hero, Sega released upwards of ten more Sonic-related titles for these two pieces of hardware, duly lengthening their lifespans.

For the Megadrive, development of a sequel was taken up by Sega of America, though members of the original team were drafted in to work alongside their yank colleagues. Released simultaneously in Europe and America on “Sonic 2’s day” - yes, a Tuesday - Sonic 2 struck more gold for Sega, sending consoles off the shelves in droves and cementing Sega’s position as a genuine rival to Nintendo.

For Sonic’s second outing, Sega wisely retained the majority of game mechanics from the original, though a quirky sonic spin-dash move was added – by pressing ‘down’ on the direction-pad, Sonic could be revved up like a motorbike before spinning off. Sonic’s sidekick, Tails, was also introduced, enabling an enjoyable two-player split-screen race mode. Pseudo-3D bonus levels replaced the hypnosis-inducing stages of the first title, giving a brief hint of what was to come over the next two decades.

Next page: Gin and Sonic
Page:
Tips and corrections
64 Comments