Identity Bridging makes your email addy your only ID

The Mozilla Foundation has shipped a second public beta of its Persona web-login technology featuring a new capability called Identity Bridging, which makes it easier for users to access sites using only their email addresses and no additional passwords.

"The goal of Persona is simple: we want to eliminate passwords on the Web," Mozilla director of identity Ben Adida wrote in a blog post announcing the release on Tuesday.

Mozilla unveiled the first beta of Persona – formerly known as BrowserID – in September 2012. With that version of the technology, users who registered an email address with server called a Persona Identity Provider (IdP) could then log into Persona-enabled websites without a password, via an authentication system based on public-key cryptography.

The new version of Persona still supports that login process, but the addition of Identity Bridging makes it possible for users who have accounts with leading email providers to use their existing email addresses to log into Persona-enabled sites without explicitly registering their addresses with a Persona IdP.

It works because most of the large public email providers already support OpenID or OAuth as a way of offering their users easy authentication on other websites. What Mozilla has done, according to a technical blog post, is build a server that acts as a bridge between these other protocols and Persona.

This first beta release of the Identity Bridging feature only works with Yahoo.com email addresses for the time being, but Mozilla says it plans to switch on support for other providers in the coming months. By the time it's done, Mozilla says, it expects Persona logins to be available to "over half of the worldwide internet population." 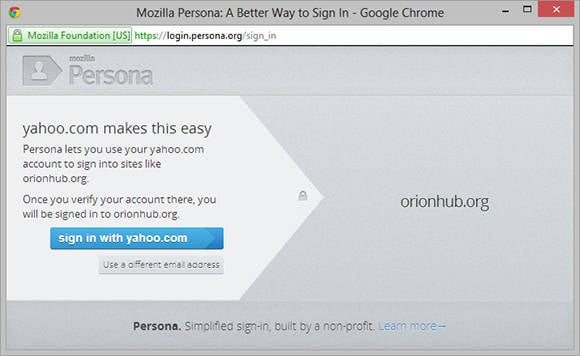 Identity Bridging only works with Yahoo! for now, but support for more email providers is coming

For now, anyone with a Yahoo.com email account can use their address to access Persona-enabled sites simply by entering it into the login field. No additional steps are required and you don't need to re-enter your password. As long as you are logged into your Yahoo.com account, the login to the Persona-enabled site is automatic.

Of course, at this early stage of the project, finding a website that supports Persona can be a challenge. Mozilla lists the Born This Way Foundation, Discourse, and the Eclipse Foundation's OrionHub as a few places you can try it out online, but the technology has yet to win adoption by major sites such as Facebook or Twitter.

In addition to adding Identity Bridging, Mozilla says the new version of Persona loads twice as fast as the previous one, particularly on slow data connections, and that it has also baked support for Persona into Firefox OS, so that apps built for Mozillafied mobes will all be able to offer simple, password-free login and authentication.

Site builders who want more information on Persona might want to read this interview with lead engineer Lloyd Hilaiel or peruse the detailed technical documentation on Mozilla's developer website. ®