We don't care that you've been buying them drinks all night ... bitch 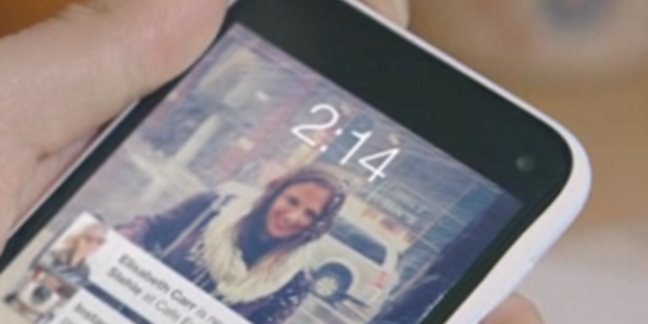 Facebook Home reskins a phone much the same way that operators have been trying - and repeatedly failing - to do for more than a decade. But can Zuckerberg really lock the the mobile customer down into its UI and achieve the operators' nirvana of customer ownership?

Facebook Home, announced last week, takes a vanilla phone and applies a branded veneer to the interface, putting Facebook front and centre in the user experience. It's a good idea, which is why the network operators have been trying to do it since before phones were smart, before social networks and before OTT was anything at all, but despite huge budgets, manufacturer support and a captive audience they've repeatedly failed, which begs the question of why Facebook should do any better.

Operators have long been aware that owning the fingertip experience is crucial to their future, but the big-name manufacturers guard their UIs jealously as differentiators. They'll grudgingly add a menu item or a bookmark in exchange for a bulk order, but other than that the operator is limited to the mandated top-line network identifier loaded from the SIM.

Not all manufacturers are so restrictive; operators approaching Pantech or BenQ could get a handset made to their specifications, which is how HTC got started in the business, but those devices only highlighted just how little operators knew about customers - despite their vocal assertions to the contrary.

The fact is that operators lacked both the skills and experience to design a mobile UI, let alone make it compelling enough to sell a phone. Like Facebook, they understood that the purpose of the interface is to sell more product, but operators were never so subtle about it - they just added big buttons for sending MMS messages,. They seemed obsessed with the idea that removing a click or two would sell more Java games and forgot what users wanted from a phone.

The operators were then, and are still, limited by the irritatingly literal EU, which continues to demand that phones work across networks, so the designer has to constantly think about how the phone will change when the user switches networks - a problem Facebook won't have to face for a while at least.

Nokia tried to resolve this with the "Operator Menu", an innovation which offered operators their own home screen just to the right of the Symbian default and loaded from (Nokia-provided) servers on each network, the location of which would be held on the SIM. But operators were frightened of Nokia's dominance and pushed the idea into the standardisation bodies, where it languished until death.

There's only room for one of us in this here SIM

The SIM is the operators' natural home, but only the most fanatical would expect to run a replacement skin from there. The GSM SIM is best considered an entirely separate computer, connected to the handset over a 9600 baud serial connection, and can no more control the user experience than it can fly a 747, though that didn't stop France Telecom trying the idea with Orange Homescreen back in 2007.

The operators had high hopes of being able to skin phones with Java, demonstrating just how technically illiterate the higher echelons of a telco are. Java produced fantastic demonstrations but when deployed, the operators found they had to first get users to download and install the app, then talk those users through finding and running it, only to discover it shut itself down as soon as memory got tight, which happened pretty quickly.

Smartphones, in the form of Symbian and Windows Mobile, didn't have this problem, prompting an explosion of VC-funded startups eager to grab a handful of highly lucrative operator contracts, and selling their services to TV stations, music labels and anyone else they could in the meantime. Action Engine, Abaxia, Surf Kitchen, Onskreen, 3G Labs and Cibenix - to name just half a dozen from a much longer list - all spent millions in VC cash helping operators to pursue the dream of customer ownership though better interfacing.

But squeezing an interface layer onto already struggling hardware is tough, and early smartphones weren't very smart. Manufacturers weren't keen to preinstall something which slowed their devices and users weren't familiar enough with installing software to be trusted with the process, so outside of a few niche applications the idea died out while the companies went bust or were acquired and operators contented themselves with updating their billing systems.

Since then a fair amount has changed. Users are confident with downloading and installing software, and the devices are fast enough to support skins atop shells, but, most importantly, Facebook won't be taking the branding away from the handset manufacturers, Facebook is supplanting Google instead, and locking out companies with Google-like aspirations.

Getting users to download Facebook Home will still be tough, and the application could easily fall foul of the patent portfolios flying around the industry: it's not as vulnerable as an Android fork but it uses some interfacing elements that look eminently patentable at a glance. But once installed, Zuckerberg will own the customer - they'll no longer be an Android user or an HTC user, let alone an O2 customer, they'll be a Facebook name and nothing more, which is why it's hard to imagine all the other industry players allowing Facebook Home to succeed.

HTC might have jumped into bed with a preloaded handset, but Samsung won't be such a willing companion. Samsung handsets come preloaded with stores selling music, books and applications, and the Koreans won't be prepared to give up ownership of the customer without a fight, though what form that fight will take remains to be seen.

Google and Samsung will come out fighting, expect much tighter Google+ integration in the next version of Android while Samsung will be thinking hard how best to frustrate Zuckerberg's ambitions, and the operators who pioneered the idea a decade ago? They'll just be collateral damage caught in the crossfire. ®