Flights across the pond won't be pleasant mid-century

Rising sea levels, droughts, torrential downpours, "superstorms" – climate change has been blamed for a flood [Ahem...—Ed.] of calamities, but new research shows that an even worse global warming–induced fate might soon befall us all: an inflight glass of wine spilling onto our lap when our airliner encounters increased turbulence.

"Our results suggest that climate change will lead to bumpier transatlantic flights by the middle of this century," write Paul Williams and Manoj Joshi in a paper entitled "Intensification of winter transatlantic aviation turbulence in response to climate change", published in the most recent edition of Nature Climate Change.

While we may jest about our favorite white linen trousers being ruined by a fine Cabernet, clear-air turbulence is no laughing matter for aircraft caught in serious atmospheric rough spots. As Williams and Joshi point out, airliners "encounter moderate-or-greater turbulence tens of thousands of times each year worldwide," and such turbulence has both injured passengers and damaged aircraft.

Clear-air turbulence is difficult to avoid, they remind us, because it can neither be seen by pilots nor detected by either satellites or onboard radar, unlike the convective updrafts and downdrafts that can be assumed to occur in and around clouds and thunderstorms.

Not that there hasn't been progress in predicting clear-air turbulence. Williams and Joshi cite, among others, one methodology developed by Gary Ellrod and David Knapp – often simply referred to as the Ellrod Index – that has enabled the UK Met Office and US NOAA to develop forecasts that the authors say have "shown significant skill when verified objectively against in situ observations from a fleet of British Airways aircraft."

The researchers therefore used one variant of the Ellrod Index, coupled with the Geophysical Fluid Dynamics Laboratory (GFDL) CM2.1 climate model and the Intergovernmental Panel on Climate Change (IPCC) A1B medium-level emissions scenario to model how climate change might affect clear-air turbulence in one of the world's busiest air corridors: the airspace within 30° to 75° N and 10° to 60° W, between North America and Europe, through which about 300 eastbound and 300 westbound flights travel per day. 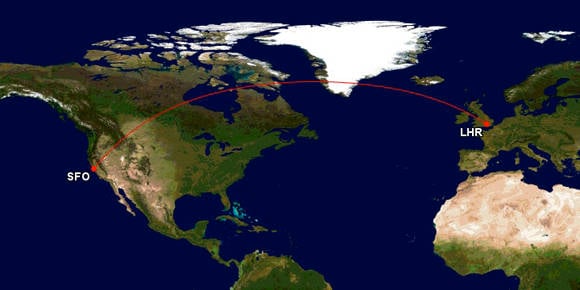 If Williams and Joshi are correct, our flights from San Francisco to London are about to get rather hairier

That modeling, based on 20 years of daily-mean data in December, January and February, and using both pre-industrial CO2 and doubled-CO2 levels, showed a significant increase in clear-air turbulence in the 50° to 80° N and 90° W to 20° E region – right where many if not most of those flights travel.

Not content with relying solely on the Ellrod Index, Williams and Joshi then ran the same simulations on 20 more clear-air turbulence diagnostics, "each believed or demonstrated to have predictive skill," and compared the results – which, if you plan to fly across the Atlantic in the middle of this century, weren't pretty. 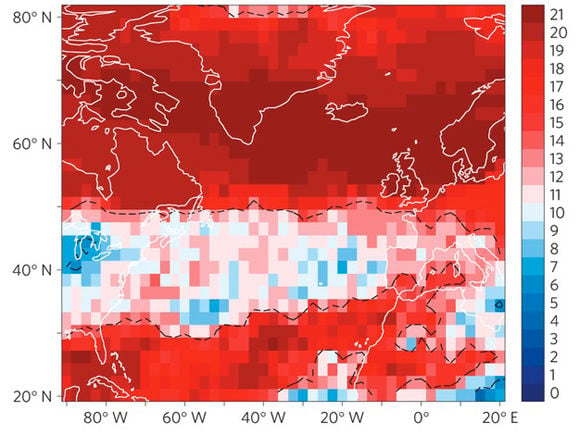 The redder the map, the more the 21 diagnostics agree about doubled-CO2 turbulence increase

In summary, to paraphrase Bette Davis in All About Eve, fasten your seat belts, it's going to be a bumpy flight.

Being proper climatoboffins, the authors of course provide a healthy helping of caveats when discussing their findings. Most obviously, as they put it, "GFDL-CM2.1 is only one climate model and A1B is only one future emissions scenario." Some models may conclude that there's nothing to worry about; others may produce more disturbing results.

In addition – and exhibiting the caution to which single-study conclusions should always be subjected – they also note that further research is needed "to quantify the impacts of climate change on passenger-relevant measures of aviation turbulence from all sources, together with their model and scenario dependencies."

That said, after noting that aircraft emissions and contrails have been demonstrated to have a minor additive effect on the radiative forcing that contributes to global warming, especially during the winter months that they studied, Williams and Joshi call the airlines on the karma carpet. "Aviation is partly responsible for changing the climate," they write, "but our findings show for the first time how climate change could affect aviation." ®

In other news from the same issue of Nature Climate Change, French and Spanish scientists have suggested that the puzzling slowdown in surface global warming since 2000 may be due to the ocean soaking up most of the extra heat energy, and that the effect may be only temporary. "If it is only related to natural variability then the rate of warming will increase soon," once researcher told Reuters. We'll see.