How I nearly sold rocket windows to the crazy North Koreans

Worrying thing is, they're even crazier than you think 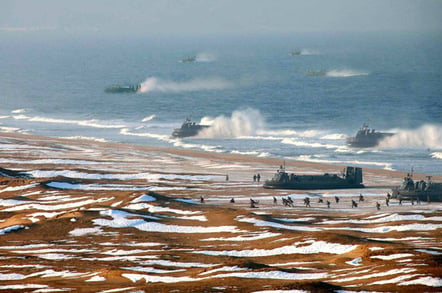 The North Koreans are rattling the war drums and claiming that they're about to drop the odd bomb on either South Korea or the US (and possibly Japan as well).

And so El Reg asks the resident metals wide-boy (me) to explain it all to you, something that might seem odd until you realise quite how wide this boy is. For I've some experience of dealing with the Norks and as a result I'm rather more worried about what might happen than most other people seem to be.

My experience comes from working in Russia. The Norks had a special deal on freight rates on the railways. So, if you had a metals deal that would only work if you got cheap rail freight (say, aluminium alloy from Chelyabinsk in the Urals to Japan) then you'd chat to the local Nork KGB guy and cut them in on the deal. Which is how one day I ended up wandering through the Nork embassy, past the mural of Kim Il Sung standing on the mountain top, to present $10,000 in fresh $100 bills to my freight rate fixer.

Do note this was a couple of decades ago when such shenanigans were indeed legal. Not necessarily moral, but legal. This then led to more contacts, including being asked to rewrite into real English the collected works of Il Sung (at $100 a volume, not me, matey) and a request to provide aluminium alloy into N Korea itself for “window frames”. That the purchasing commission for these “window frames” was to go to three generals made us think that perhaps the windows were going to be on the rockets that you can also make from aluminium alloy. Fortunately my lust for lucre was never really tested as this sovereign nation was unable to come up with a Letter of Credit for $250,000 as required. Their “western” bank simply didn't think they were good for the cash so refused to issue it. Which is one interesting little fact about the place.

But it was that long-ago meeting with those generals that makes me worried about what the Norks might do now. For they were entirely, completely and totally unaware, ignorant, of how the wider world worked. Even my demand for an LoC surprised them. But surely I would just do what the State desired of me? And who could doubt that the State would indeed pay me if it was in my or the State's interest to do so? Umm, yeah, right.

We've all heard of groupthink, even of brainwashing. And the problem is that the people at the top of this State really do seem to believe their own propaganda: that the world really is out to get them; that their army, were they to unleash it, would sweep all before them; and even that lobbing a nuclear bomb at wherever would make all quail before their mighty power. They seem not to have considered the option obvious to the rest of us: that doing so would turn Pyongyang into a shiny glass parking lot for the assembled armies of the world.

Then there's the game theory aspect of it all. We hear reports about how the Young 'Un faced resistance from leading elements of the army, to the point of an attempted coup a couple of weeks back. Thus, we now have the traditional "let's all be beastly to the foreigners" rhetoric to unite the nation behind him. And the problem with that is there's always the temptation to actually unleash the forces upon the foreigners.

And, as I said, my impression certainly is that they will think they could win if they did so - not realising that in this modern military world having lots of troops and lots of tanks just doesn't cut it.

Oh sure, that Nork army unleashed would do a great deal of damage, would make a hell of a mess of Seoul and such places. But it wouldn't actually win, it would be beaten back and that would be the end of the State. The question is: do the people running that State, and that army, actually believe this? What worries me is that, having met several of them, I don't think they know enough about the rest of the world to actually understand this.

Of course, what really concerns everyone here, if war does indeed break out, is what happens to the tech shiny-shiny that S Korea pumps out in such volumes. All those iPad components and Samsung Galaxys.... And the answer is almost certainly: not a lot, in a long-term view.

Yes, of course, it would be a horrific disaster, not least for those who would lose their lives. Less importantly, there would certainly be interruptions to production, something we would feel in our globalised world. But once the actual fighting was over it wouldn't take long for normality to return. It's worth noting, for example, that Germany was almost entirely flattened by 1945. Yet the place was back up to pre-war production and GDP levels by the early 1950s. For the truth is that the real wealth in an economy is in knowing how things ought to be done.

Of course I hope it all calms down, that nothing comes of it all. But I'm really not sure about that. For I can see the internal logic, the game theory aspect, of Kim Jong Un needing to bind the nation to him through bellicosity, the belief of the military that they could in fact win and thus resulting in a vast loss of life through terminal bloody stupidity and ignorance. ®