NASA's Hubble telescope has spotted the most distant massive star explosion of its kind ever, one which could help boffins understand the very fabric of the universe. 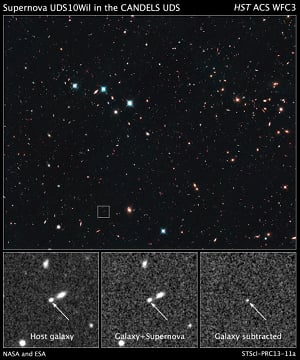 The telescope picked out Supernova UDS10Wil, also known as SN Wilson, in the night sky. The star apparently blew up over 10 billion years ago, and the resulting light from the explosion took that long to reach Earth.

Wilson is in the special class of Type Ia supernovae, which give astroboffins a consistent level of brightness that can be used to measure the expansion of space and also help with deductions about the nature of dark energy.

The find is only four per cent more distant than the last record holder, though that's still 350 million years farther back in time. Discovering Type Ia supernovae this early in the universe's life allows astroboffins to figure out which of two competing explosion models are correct. In one model, the explosion is caused by two white dwarf stars merging and in another, one white dwarf feeds off its partner, a normal star, until it greedily accretes too much mass and explodes.

"If supernovae were popcorn, the question is how long before they start popping?" Adam Riess of Space Telescope Science Institute asked. "You may have different theories about what is going on in the kernel. If you see when the first kernels popped and how often they popped, it tells you something important about the process of popping corn."

Figuring out the trigger for these explosions will also show how quickly the universe enriched itself with heavier elements such as iron, one of the raw materials for building planets and life.

The team's results will be published in an upcoming issue of The Astrophysical Journal. ®