Ten years in chokey on the cards for defacement and intrusions 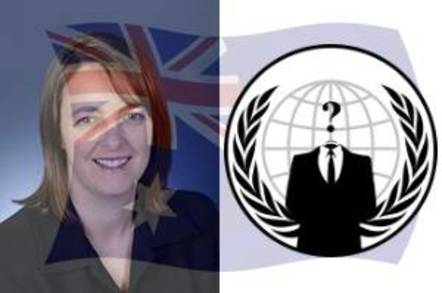 Australia's Federal Police (AFP) has announced a 17-year-old has been charged for alleged crimes undertaken in the name of Anonymous.

The AFP has issued a statement about the arrest, but won't say anything else on the matter.

The statement “A 17-year-old youth appeared in Parramatta Children's Court on Friday (5 April 2013) to face charges relating to unauthorised access to computer data.”

“The juvenile is suspected to be a member of the online issue motivated group 'Anonymous" and allegedly committed serious offences on their behalf.”

The AFP says the accused was charged with the following:

The statement also says the youth's home was searched in November 2012. The Reg has no way of knowing if the arrested Anon worked on operations targeting Australia or other nations, but the appearance in a local court suggests onshore issues. If that's the case, the most high-profile Anonymous attack in Australia during 2012 saw the release of customer records belonging to telco AAPT in August, as part of a protest into Australia's consideration of data retention laws.The last three charges listed fit the AAPT incident quite nicely.

The accused will appear in court again on 17n May. ®