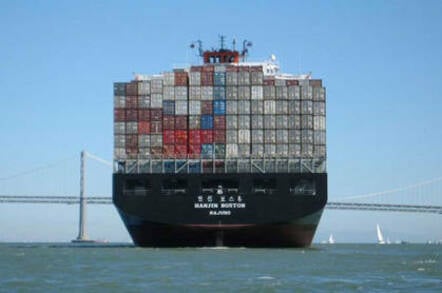 One of the fallback positions of IT vendors defending their high Australian prices has been to remind Australia that shipping and transport are expensive here.

So, ever your servant – and confronted with the kind of slow-news-day syndrome that can happen only when America is still busy trying to identify which stories were April Fool's pranks and which were not – Vulture South has seized its courage in both hands and had a go at toting up the likely cost of freight.

Since the most egregious and outrageous examples of vendors treating themselves to a little extra courtesy of rent-seeking and price discrimination happen in software, this little thought experiment will assume that the retail product in question is software arriving in a DVD-sized box.

The Register is also assuming that you're a vendor of scale – large enough that merely landing product in Sydney isn't good enough.

First: even if you take volumes into account, trans-Pacific shipping to America isn't necessarily cheaper than to Australia, if your manufacturing is in China, because the distances are greater. It's 5,400 nautical miles, more or less, from Shanghai to San Francisco; it's 4,600 from Shanghai to Sydney (according to sea-distances.com).

Prices The Register has seen for the two routes (there are plenty of China-based shipping agents listed on Alibaba, for example) ranges from $US50 per cubic metre for a 40 foot container up to $US150, with Australia offered both the cheapest and most expensive spot prices. Settling in the middle, $US100 per cubic metre, a 40-foot container stacked half-height (since you don't want your nice packaging spoiled by stacking pallets on top of other pallets) has about 33.5 cubic metres of cargo space, costing about $US3,350 to ship if you stack your stuff on top of someone else's. Let's assume you're willing to use only half the volume on offer to ensure your goods arrive in the best possible condition and pay full freight of about $US6,700.

Second, what does the cost of in-country road transport do to the price of the product?

It may surprise you to know that it costs nearly as much to take a container of product by road from Sydney's Port Botany to Melbourne as it did to land the container in Australia: once you have paid $800 or so for the fuel, the price of the driver (with extra fees for the overnight trip), the hire of the truck, load-unload charges, wait times and so on, you're lucky to have change out of $3,000 (The Register arrived at this estimate in conversation with a driver familiar with long-haul trucking, since while shipping agents will give you a price on the phone, they won't give talk about the level of discount available for a high-volume customer).

Our two-DVD set of software in a DVD box has now cost another three and a half cents per unit to transport between Sydney and Melbourne. If it had to go all the way from Sydney to Perth, let's be generous and say that quadruples the cost to 14 cents in trucking. Total so far per unit? Ten and a half cents if our software box goes to Melbourne, 21 cents to get to Perth and probably Darwin, Adelaide or Cairns for that matter. Let's also throw in an entirely arbitrary twenty dollars a unit to cover freight forwarding (aka import paperwork) and couriers to get the box between warehouse, distributor and end-user. That gets us to $20.21 per unit.

What if the product is a little bigger?

The MacBook Pro 13” I'm writing this on comes in a box measuring about 368 x 273 x 70mm – which means the container can only carry around 4,500 units. At $6,700 inclusive, shipping a single-stacked container from Sydney to Melbourne costs a shocking $1.49 cents per unit to get here on a boat and then about another 66 cents to truck it down the Hume, for a total of about $2.25 in transport costs for a device that retails here for upwards of $AU1,350.

Are those costs massively higher than those in the UK and Europe?

Interestingly, when eBay intervened in the debate in 2011, its focus was on postage of single products: it complained that for one DVD, postage in Australia represented 2.7 percent of the delivered price of a DVD, compared to 1.5-1.7 percent in the US and UK – which is still a handful of cents out of an expensive piece of software. This was covered over at Crikey at the time.

Gasoline prices are lower in the USA than just about anywhere else, and wages for lower-skilled jobs aren't stellar in the land of the free. It's safe to assume it's therefore a little cheaper to move DVD boxes from, say, Los Angeles to Denver than Sydney to Adelaide. Europe, however, is not a cheap place in which to buy liquid fuels and as it is further from China than Australia it is safe to assume shipping costs would be higher.

Even if Australian costs are still somehow higher than those in the USA and Europe, our analysis of per-unit shipping costs suggests they are nowhere near high enough to justify the extraordinary local markups that provoked a Parliamentary Inquiry into the matter.

When vendors cry crocodile tears about shipping costs making their products cost more in Australia, despite exchange rates, than they do in America, you have The Register's permission to laugh at them. ®