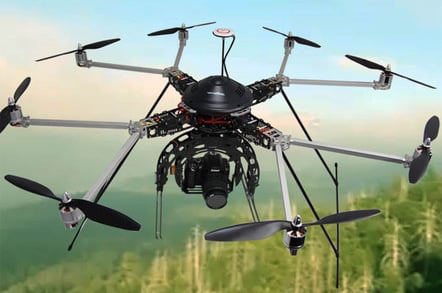 Animal Liberation Australia has acquired a drone and plans to fly over farms and film animal cruelty.

Mark Pearson, Animal Liberation's executive director, told The Reg concerned members of the public told him about drones and their potential application capturing aerial surveillance of mistreated animals. Pearson said he put the idea to the organisation's board, had it signed off and now has a CineStar 6 hexacopter on his desk awaiting deployment.

“If we are notified of serious animal welfare problems like hunger, thirst or lack of shelter, we will deploy the hexacopter above the farm and document what is going on,” Pearson said. Footage would then be reviewed by an animal welfare expert before the group sought to alert authorities.

Pearson said Australian common law allows overflight and filming of private property from an altitude of at least ten meters. He's less certain of his organisation's legal standing as an operator of the drone, as toy drones don't require a licensed operator in Australia but commercially-flown craft do. As a not-for-profit, Animal Liberation isn't quite sure where it stands, but Pearson is confident the two Animal Liberation team members trained to fly the drone will be cleared for take-off soon.

He's also confident that farmers will not, as suggested by representatives of the Northern Territory Cattleman's Association, shoot the drone out of the sky.

“It sounds like a flock of blowflies and at twenty metres you can't see it,” Pearson said, explaining it will be hard to hear or see when in use. The potential for prosecution for damaging property is another deterrent he expects will see weapons remain holstered.

Pearson also acknowledged privacy concerns about Animal Liberation's new air fleet, but said farmers with nothing to hide have nothing to fear. Those who mistreat animals, however, have plenty of recent evidence of the group's influence: film of Australian cattle being treated inhumanely in Indonesian abattoirs recently saw live cattle exports suspended after a public outcry. ®