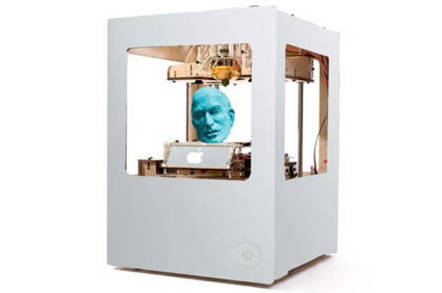 Analyst house Gartner has caught the 3D printing bug with its latest forecast on the future of the industry, and predicts enterprise-quality printers being cheap and plentiful by 2016.

"3D printing is a technology accelerating to mainstream adoption," said Pete Basiliere, research director at Gartner. "The hype leads many people to think the technology is some years away when it is available now and is affordable to most enterprises."

A glance through our recent 3D printer roundup shows you get a functioning system for around $2,000, or even less. By 2016, however, Gartner predicts the price of high-end printers that currently cost tens of thousands of dollars will have fallen to the same price point. The effect on usage could be similar to that of the PC after Phoenix opened up the IBM-clone market and made that platform affordable.

At that price point it makes financial sense for some companies to get their own 3D printer for making custom products such as jewelry or machine parts, Gartner forecasts, and the market will be helped by improvements in 3D scanning systems and modeling tools.

But $2,000 is still a lot of money for the average consumer in these cash-strapped times, so Gartner suggests that 3D printing's first flush will come as a bureau service – for which plans are already afoot. The normally staid analysts even take a flier on the idea of vans packed with 3D printers that can be deployed in shopping malls across the land.

"Customers would visit these self-contained vans parked in front of the store that contain two or three operating printers and watch parts being made (including possibly their own personalized 3D item). Alternatively, the consumer could order the custom or personalized part to be made while they are shopping, or to be available for pickup the next day," suggests Gartner's report.

Quite how accurate this is remains to be seen, but the suggestion did remind this hack of similar predictions for the fax machine back in the 1960s when Xerox patented and sold the first commercial systems.

Back then there were suggestions that there'd be fax machine shops in every city, with the documents themselves being delivered by messenger boys, as telegrams had been. But the increasing sophistication and rapidly falling price of fax machines killed this idea as businesses started buying in.

3D printing has a long way to go, particularly in terms of the materials you can and can't print – not to mention if you're legally allowed to go so, as in the case of firearms. But major patent trolls are also moving into the area (a good indicator of success these days), prices are falling, and the printer's sophistication is getting a lot better.

So if 3D printing is as useful as some of its advocates claim, don't start investing in a 3D printmobile just yet ("Print My Ride" perhaps), you might be outpaced by the technology. ®