Motorola minimum-wage sheriffs ride in to SAVE the HIGH STREET

These steenkin' Smart Badges ... do we need them? 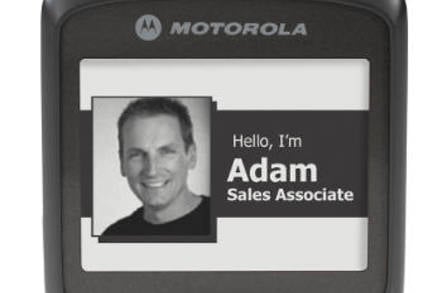 Ready to save the high street comes a smart badge from Motorola, promising to turn physical shopping into a connected experience designed to lure back the Amazon generation.

The SB1 Smart Badge isn't the only technology Motorola reckons can save physical shopping, but it’s a key component in the push to bring the convenience of the web to the high-street: which is fantastic just as long as one believes that greater connectivity and better productivity is all the high street needs to attract business, as opposed to a more radical overhaul of physical shopping.

Motorola can certainly improve the existing experience, and has set up an entire suite of shops in its Basingstoke offices to show off what technology, including the Smart Badge, can do to make the act of buying stuff a little less fraught. 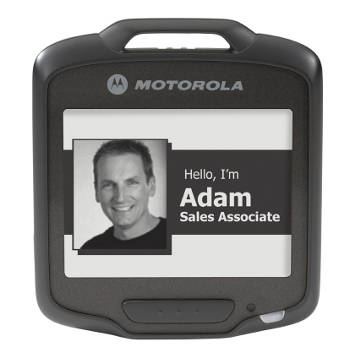 It's surprisingly robust, though the touch-screen is resistive and there's no colour

The badge itself is a Wi-Fi connected device, with a 14-hour battery and a resistive touch screen using e-ink to keep power consumption down. There's a bar-code reader in there, and a microphone for push-to-talk functionality using a headset or snapped-on speaker, and a programmable LED for notifications, but it's the HTML5 browser which opens up the possibilities and turns the badge into a (excuse the term) work-flow guide.

Basically that means the minimum-wage shelf stacker gets instructions displayed on the badge rather than over the tannoy or held on a clipboard. The bar-code reader lets the same worker check stock or pricing should a customer speak to them, and push-to-talk to consult a supervisor in case the customer uses long words. This is a fine start and there's a video to show it in action, but it'a not going to revolutionise high-street shopping alone.

We know where you were last minute

Once the store is awash with Wi-Fi, and customers have failed to read the T&Cs in the usual way, then customers and staff alike can (and will) be tracked to within a metre. That provides plenty of data for traffic analysis, but combined with the SB1 it enables some proactive customer support.

It's easy to imagine a shelf-mounted button which calls the nearest staff member to assist, but why wait for the customer to ask? Software can spot when someone is lurking around the wines, perhaps alerting the nearest staff member that they might be looking for a recommendation, or (if humans aren't available/can't be trusted) send the customer a discount coupon to tip them over into the more-expensive selection.

Customers checking price-comparison sites might get a coupon too, once they’ve been spotted getting the Amazon price over the store's Wi-Fi network - they agreed to the monitoring as part of the T&Cs, obviously. Dropping an inflated price into the returned HTML would probably be illegal, and certainly immoral, but knowing that the customer is checking on-line prices, and seeing the price they get back, is useful - especially when the store knows its own stock levels just as accurately as Amazon does.

What's cheaper than a barcode?

RFID tags, radio identifiers which come in at around five pence a shot, can be embedded in product labels to allow instant stock taking - both in the warehouse and on the shelves - and Motorola reckons that as soon as one starts breaking down items properly then RFID comes in cheaper than barcodes too.

Barcodes aren't free: Universal Product Codes (the numbers which make up the bar code) have to be bought from Global Standards One, so the more often a number is used the less it costs. That prompts manufacturers to use the same code on all red shirts, regardless of size, and sometimes even share codes between colours of the same cut, so systems based on bar codes will know how many red shirts are in the store, but not how big they are.

Motorola contends that once every variation has a different number then RFID tags - with their vastly-superior number range - work out cheaper.

It's all a matter of scale, and we'd imagine there are many circumstances where barcodes would still be cheaper, but there's no denying the additional functionality RFID provides when a pallet of goods can be counted, logged and recorded while being wheeled though a warehouse door - and RFID isn't just about stock control.

Place an item of clothing on the desk and the embedded reader will call up video of showing what it looks like on a model. Motorola's examples are, perhaps, more tasteful than the semi-naked girls already modelling mens' coats in Japan but the concept remains the same. More interesting is the idea of feeding back removals to the staff - a coat which keeps being taken off the shelf, and replaced, might have a stain or tear which needs attention, while customers who remember they've not had a 26-inch waist for a decade can check if other sizes are in stock from the screen in the changing room, even asking staff to fetch one if necessary.

It's high-tech, but is it the future?

Most of the ideas being pitched by Motorola's retail division are about squeezing more value out of existing systems, de-skilling staff and ensuring that customers can quickly find what they want, but that's fighting the internet on its home turf - no-one can compete with Amazon when a customer knows what they want. High Street stores need to excel at selling things the customer didn't know they were after, and greater technology might not be the best way to achieve that.

Specialist stores, staffed with enthusiasts, gain little from smart badges or Wi-Fi tracking but can compete with on-line retailers in guiding customers who've not yet made up their minds. Such stores are unlikely to fill the UK's High Streets, but with the supermarkets on one side and Amazon on the other there's precious little alternative for the modern shopkeeper.

Motorola's technologies will squeeze a little more life out of physical shopping, cutting costs to keep the lights on a little longer, but it's hard to imagine a badge saving the British High Street, even a Smart one. ®