BlackBerry CEO: Our vibrating devices will satisfy most needs 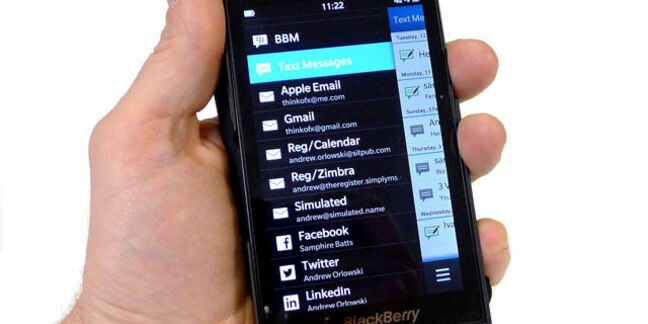 BlackBerry CEO and President Thorsten Heins has declared the organisation he leads is “not a phone company” but a mobile computing company whose networks and operating system can be used to connect a wide range of devices.

Speaking in Sydney, Australia, at the formal local launch of the new Z10 handset, Heins bridled at suggestions the new mobe is a make-or-break proposition for the company.

“A phone is only part of a mobile computing solution,” he said. “Mobile computing is about services and the way you bring them to the end user,” he added, suggesting BlackBerry's experience running messaging services makes it ideally positioned to work in other applications that require widespread and secure networks.

Such applications, Heins said, are already emerging in cars, where machine-to-machine communications are appearing as a diagnostic or traffic management tool. To deliver such services, he said “you need a network that is secure to transport data and you need a device at the car. That device does not have to be a smartphone.”

That device does, of course, need an operating system of some sort and Heins said he feels the QNX OS at the heart of BlackBerry 10 is well-suited to automotive applications given its roots in embedded development. Several auto-makers already use QNX, he added, and they tend to be loyal.

They're also looking for help, according to Heins.

“Car markers want to speed up their innovation cycle to internet speed,” he said. “They are actively engaged to find out what is mobile computing in their industry."

Healthcare is another field in which Heins has said QNX - and by extension BlackBerry - can "add value" with its combination of specialised devices and a trusted network.

Heins' also spoke about his vision for BlackBerry as a service-enabler that just happens to sell hardware in response to questions about the possibility that the firm would once again address the tablet PC market.

“If I build a tablet I will not build it for the hardware purpose,” he said. “I will do it around a service or a services value proposition.”

“Pure hardware alone is a cut-throat businesses. Our vision for mobile computing is how can we take it to the next stage, not just another tablet or the next design for tablets.”

Heins also has an eye on the enterprise market, saying he thinks end users will soon tire of carrying a mobile phone, tablet and laptop. The computing power of the mobile, the thinks, will satisfy most needs, although he did not offer a vision for how it will be adapted or evolve to offer a better user experience for diverse tasks.

Challenged on whether BlackBerry can achieve these goals, he retorted that upon arriving at BlackBerry he was told he had little chance of achieving anything, given the parlous financial state of the company in early 2012.

“We have done very poorly in financial management,” he conceded. “I was told in two quarters we would be bankrupt. I was told we did not have enough cash to get BB10 to market.”

Both of those predictions were clearly wrong, and Heins says market share growth and net promoter score – a metric that measures how many customers would recommend a purchase – have been “high” in every market BlackBerry has entered with the Z10.

Throw in the company's 79 million current customers, plus carriers he says are crying out for an alternative to the iPhone/Android duopoly, and Heins sees plenty of upside.

“I am not claiming victory,” he said. “I think we got off the starting grid very well.”

Left stalled in the pits, meanwhile, is Lenovo's reported bid for BlackBerry, which Heins dismissed on the basis that Lenovo executives seem to have little idea of just what they are purportedly buying.

"The comments surprised me," Heins said. "When you listen to what [Lenovo CEO Yang Yuanqing] said afterwards, he said, 'I first have to understand what this company is about'. That would tell you a lot about the maturity of the approach." ®