How UK gov's 'growth' measures are ALREADY killing the web

A digital landgrab for Google, everyone else can find the EXIT 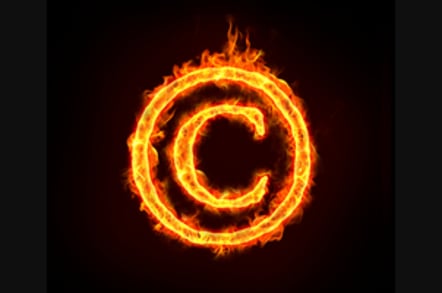 Analysis Yesterday the House of Lords debated measures smuggled into the proposed Enterprise and Regulatory Reform law - measures that would lead to fewer photographs on the web and potentially cripple British businesses. Allow ace aerial photographer Jonathan Webb to explain.

Webb runs an aerial photography business and deals with fabulous photographs like this. His income comes from licensing stock for use in books and TV programmes as well as some bespoke work. Google rates his site as the fourth most popular for aerial archaeology. It's an expensive business, since hiring a chopper for a shoot can cost up to £1,800 an hour - and the payback may take years.

Webb has already begun to scale back his UK business, instead focussing on European operations, due to the uncertainty created by the Conservative-led coalition government. If the planned Enterprise and Regulatory Reform (ERR) measures pass into law he may pull out of the UK altogether. One more small business lost in a recession. Quite an achievement for legislation that's supposed to promote enterprise.

So what's the beef?

Webb depends on licensing, and needs strong law to back him up. He can't afford a huge litigation department nor any lobbyists. The government is weakening his legal protections. A user will be able crop one of his images, and under the new rules anyone can use the resulting cropped picture. This, naturally, cuts his business out of the loop.

An image with Webb's information removed is classified as an "orphan work", a misnomer since it evokes dusty black-and-white library photos, works where the author cannot be found or may not be alive. Yet the changes impact living people like Webb with commercial businesses. Defenders of the proposed rules have thrown in a sop: only after a "diligent search" can an orphan image be used.

'If orphan works are sold at a tenner each, nobody has the incentive to pay £150 for an image. People will nick them with glee. Yet people don't see the cost of the helicopter'

"There's no such thing as a diligent search," Webb protested. "It's impossible. If you have a photo of a little-known celebrity you may be able to find the author. But if you have an aerial photograph of Manchester there are a gazillion images."

Webb told The Register about the economic impact of the government's suggested "growth measure":

Those affected most are those with high value pictures. If orphan works are sold at a tenner each, nobody has the incentive to pay £150 for an image. People will nick them with glee. Yet people don't see the cost of the helicopter.

There's a short-term economic "welfare gain" from abolishing intellectual property law. This is as far as zealous "copyright reformers" and sympathetic academics typically take the argument.

But once the law is weakened, the economic hangover starts. Businesses withdraw to where protection is stronger. Fewer works are created. Talented people move offshore, or do something less creative. What was once a healthy creative economy begins to resemble a failed state, like Somalia.

And in Webb's case, the hangover has already started.

"I love taking useful pictures - and that will come to end," he said.

Other aerial photographers confirmed his pessimism, and told us that although they're vastly outgunned by Google and the culture lobby, they are strongly opposed to the proposed ERR clauses.

The wrecking legislation, sponsored by the Coalition government's business secretary Vince Cable and Lord Younger, is being bundled through before copyright exchanges, or "hubs", can be set up and shown to work. Politicians prefer market-based solutions, but they have been mugged by their officials: in particular, zealous "copyfighters" at the Intellectual Property Office. It isn't clear that they understand copyright, but it is clear they sure as hell don't like it. Whatever it is.

The unwritten British constitution protects property owners against over-reaching ministers. This is why the copyright zealots don't like to regard intellectual property as "property".

But that's how constitutional law - and international treaties - regard it; protecting you as a creator rather better than a homeowner who finds himself on the planned route of a high-speed railway line. Yet "copyright reform" treats businesses like Webb's as collateral damage.

He told us that the chill has already started.

"There are already fewer photographs on the web," Webb told us. "I've taken very few stock images over the past year. I spent my budget for stock in Germany. Stuttgart is my next job. So sorry, but if you're in Bristol - one of only a couple of cities and towns I've not done - I'm not going to waste my money taking pictures of Bristol. What's the point?" ®

Facebook flogs dead horse. By flog, we mean sues. And by horse, we mean BlackBerry