Qualcomm thrown under a bus in Qi battery top-up rumour 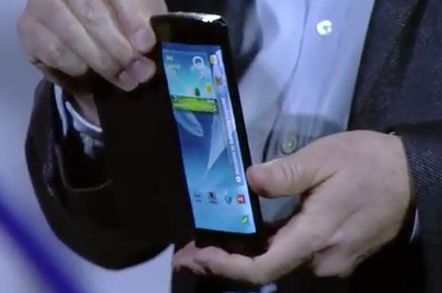 By plumping for Qi, Sammy will betray Qualcomm: both companies are founding members of the Alliance for Wireless Power, which touts an over-the-air charging system called A4WP. This rivals the competing Wireless Power Consortium's Qi technology.

But the Samsung Galaxy S4 mobe will be topped up by the consortium's Qi compatible chargers, rather than the Samsung-backed alliance's A4WP tech, according to industry rumours reported by DigiTimes.

The alliance's A4WP is entirely incompatible with the consortium's Qi standard. A4WP emerged from Qualcomm's acquisition of WiPower and Samsung's existing work in the area, while Qi came out of Amway's love of filtered water, so we'll take some convincing that Samsung plans to abandon its own work and embrace the latter.

The two standards use different wavelengths so they'll be no compromise, and Samsung's partner Qualcomm has always been very bullish in arguing that the technical advantages of A4WP would wipe out the first-mover advantage achieved by Qi, despite both Google and Nokia being firmly in the Qi camp.

A4WP's killer advantage is distance: it can charge devices from several centimetres away so a charger in a car chair can provide power to the phone in one's pocket. Qi still requires devices to be placed in just the right place although it is becoming more flexible on that front.

Apple will also start using wireless charging this year, according to the rumourmill, using a proprietary standard. The iPhone maker's technology, if it exists, will likely boast distance charging, based on both Cupertino's patent in the area and the fact that distance charging can really offer a new experience: the idea is that one never directly "charges" one's phone; the gadget just picks up power when it can, and that can only be achieved with separation.

When the Galaxy S3 was launched, Samsung promised a replacement case that would enable wireless power charging, but that never arrived and announcing the same thing for the S4 would open the company to ridicule at the very least. Given the A4WP specification was completed in November and published in January, the S4 would be the obvious device to showcase what it can do, or perhaps the last chance to show that the race to dominate wireless charging isn't yet over.

If Digitimes is right, and Samsung is boarding the Qi bus, then surely it's all over for the A4WP, and Qualcomm will have to file it with Mirisol, MediaFLO and BREW-MP as technologies that could have ruled the world but never quite did. ®