Honk if the car in front is connected

The networked car is coming sooner than you think 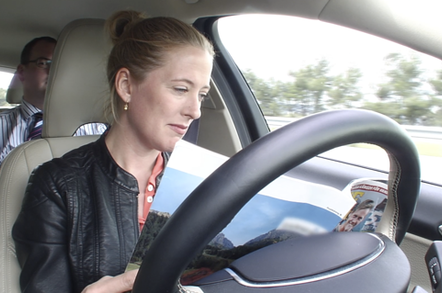 Feature Connecting cars to the internet and to each other seems to be inevitable, whether or not you approve - and plenty don’t. Let’s face it, though, everything else is connecting to the internet, so why not your favourite drive? By 2017, according to ABI Research, a market watcher, some 50 million connected cars will be sold every year. Penetration of factory-installed safety and security telematics in new cars will this year reach 15.7 per cent of all vehicles sold. Like it or not, it’s all part of the humongous Internet of Things, and it’s happening now.

Car makers talk up a number of benefits for car connectivity, the main one being improved safety. You’ll also get notifications of emergency speed limits, traffic jams and accidents further up the road, not to mention access to entertainment in the cloud. You’ll be able to check the status of your car long before you slip in behind the wheel. 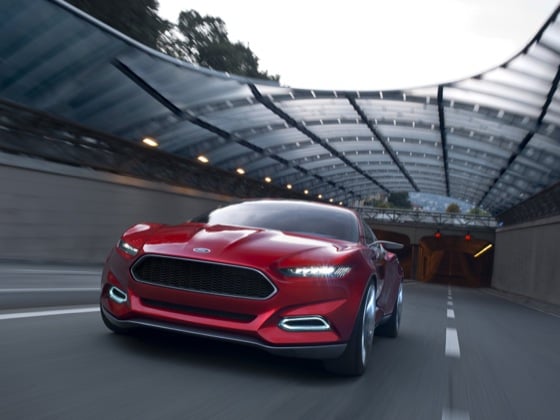 Ford's Evos concept: a car designed with connectivity in mind

And in the longer term, with cars actively connected to each other, with sensors collecting data about the car’s immediate environment, and with an increasing number of ways in which the car can take control of the driving process - think adaptive cruise control and lane departure correction systems - the ultimate goal is the self-driving car, Google-stylee. I’ll get to that.

All the major car makers are at it. Audi, GM and Ford all even made announcements at this year's Consumer Electronics Show (CES), for example, showing the degree to which connected car technology is moving into the mainstream.

According to Professor Pim van der Jagt, managing director of Ford's European Research Center, car makers’ development efforts are focusing on two main areas of research. The first is about connecting the car to the internet, which can house data such as your music library or movies to keep the passengers occupied. At CES, Ford announced an open development platform that will allow developers to build applications for its connected cars.

As an example, Ford’s Sync AppLink will allow the car to act as the interface between the likes of Amazon and your phone, allowing you to stream music through to the car’s speakers.

More interesting though is the two-way car-to-car communication systems on which all car makers are working, using a dedicated, short-range communications network, not the internet. This is a car-to-car network that, according to van der Jagt, allows each car to tell other vehicles where it’s going and what driving conditions it’s experiencing.

There’s a very clear benefit to this. “If 100 per cent of vehicles had this we could improve safety dramatically,” says van der Jagt. Getting this kind of technology into every new car is an ambitious goal, but it has to be fitted to the vast majority of them to make a difference. “All car makers believe in this but we need it to be installed in 80 per cent or more of the fleet.”

Recognising that a single-make car-to-car network isn't useful, the car makers banded together to develop a car-to-car communications protocol that will allow all makes of car to talk to each other. Ford is one member of the CAR-2-CAR Communication Consortium, whose mission is “the development and release of an open European standard for co-operative Intelligent Transport Systems and associated validation process with focus on Inter-Vehicle Communication Systems”. 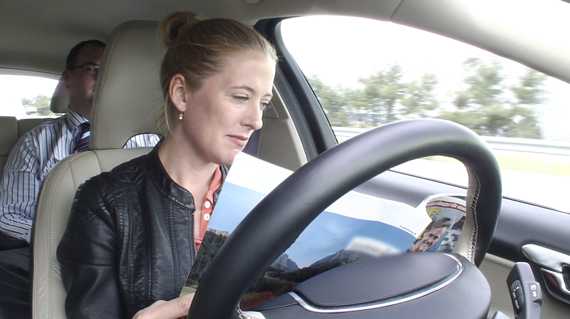 Reading at the wheel: not a sight you'll see for some time

Filip Sergeys from Honda’s Government Relations and Regulations division in Belgium reckons that the car makers have agreed on a common roll-out plan. “If one brand went first, the customers would have no other vehicles to talk to or be locked into the single brand,” he says. “So it needs a quick ramp-up, with same benefits from all new cars.”

Being able to steer clear of traffic jams could become a reality, and perhaps even the jams themselves could be made a thing of the past. As traffic starts to build up, cars whose average speed is slowing down broadcast to cars on the opposite carriageway - who then pass this information to cars approaching the jam. Prewarned, they can take evasive action well ahead of the jam, potentially preventing a simple slowdown becoming a gridlock.

Next page: A major contribution to road safety
Page:
Tips and corrections
83 Comments