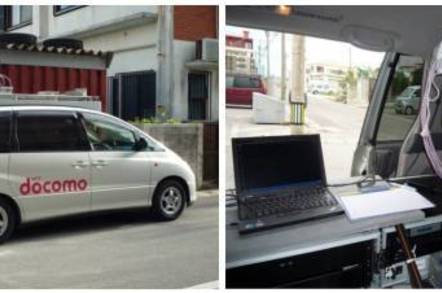 Japanese operator NTT Docomo has successfully tested uplink packet transmissions at an uber-fast 10Gbps, hundreds of times quicker than the 4G services only just beginning to roll out across North America and Europe.

The outdoor experiment was conducted in collaboration with the Tokyo Institute of Technology in Okinawa’s Ishigaki City back in December, NTT revealed last week.

The test used 400 MHz bandwidth in the 11 GHz spectrum, and although only uplink transmissions were trialled, the operator said 10Gbps downlink speeds should be possible with the same equipment.

Tempering industry enthusiasm a little, however, is the fact that the “mobile station” used to transmit the data was not a functioning device but a Docomo van crammed full of no doubt, power hungry, high-tech kit and travelling at just 9km/h (5.5mph).

“In light of the squeeze on remaining frequencies as mobile data traffic continues to increase, Docomo aims to achieve a transmission speed of more than 10 Gbps using super-high-frequency bands exceeding 5 GHz.”

Although NTT Docomo acknowledged that such high frequencies have historically been no good for long range transmissions, it offered no insight into how it’s planning to overcome this.

In the meantime, Japanese smartphone users will just have to put up with the 100Mbps maximum rate of Docomo’s Xi LTE service – while UK speed freaks can only look on in wonderment, and settle for the 30Mbps-approx of UK operator Everything Everywhere’s 4G service.

NTT Docmom has a handy diagram explaining the trial here. ®

Getting ready for CD-to-download sales shift