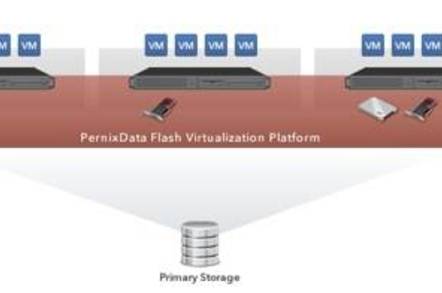 PernixData has opened its kimono, a little - but really we know little more than that it will provide flash storage facilities to virtual machines.

The now not-so-stealthy startup talks of a flash tier of storage between a network storage array. This is its Flash Virtualisation Platform (FVP), a software-only data storage tier for app acceleration. This software virtualises a server's flash storage and uses a scale-out architecture to pool a group of servers' flash storage. Remind you of anything? For sure this is a virtual storage appliance, like HP LeftHand's VSA, only using server flash rather than server disk.

Okay, well, yes, not exactly earth-shattering is it? HP could do this with its LeftHand VSA surely - ditto any other supplier with a disk-based VSA: alter it to use flash, job done.

Does PernixData have anything else up its sleeve?

It says the flash becomes the performance data storage tier while the backend storage array becomes the capacity data tier.

It says FVP is a hypervisor-only module, and: "Clustered hypervisor features such as live migrations and distributed resource management continue to operate seamlessly with FVP." FVP works with any hypervisor and flash device and is transparent to applications. It has no single point of failure and survives "loss of flash devices, networks, servers or backend storage."

It provides per-VM policies and resource management and accelerates both read and write operations;

For write operations, FVP can be configured so that changes to the data are initially committed to the flash and later persisted on the backend storage. In such scenarios data loss is prevented via synchronous replication to flash devices on peer servers in the cluster.

That sounds pretty good. It seems to us that the flash is turned into a storage area network, a flash SAN, and not into storage memory. So applications in virtual machines read and write data through their host operating system's disk IO subsystem. The servers need to be connected via a high speed link otherwise the latency of data access on remote servers will be higher than access to the local server's flash.

We wonder if PernixData will add flash management techniques to increase endurance. We wonder how it will differentiate itself from HP LeftHand (StoreVirtual) and other disk-based VSA products if and when they embrace flash. It doesn't seem to us that, based on what we know so far, PernixData has a terrific offering. There has to be more hidden behind its kimono. ®