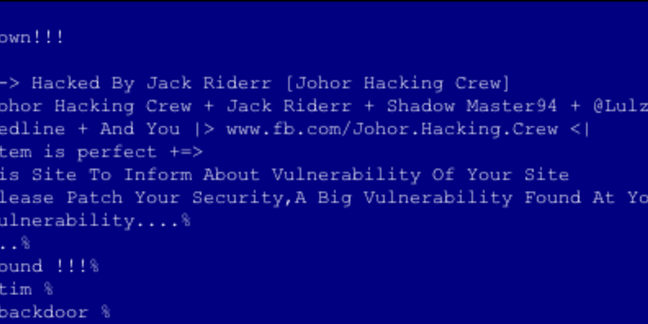 A group of hackers identifying themselves as Johor Hacking Crew have defaced 30+ sites hosted by Melbourne company ServersInSeconds.com.au.

There appears to be no motive for the attack other than the fact the hackers spotted a vulnerability and decided to exploit it to dish out a lesson in security. That lesson was delivered as a scrolling defacement and a Pastebin dump listing the afflicted sites.

The finger for the defacements was first pointed at Canberra company UberGlobal, as the servers reside on IP addresses an servers the company curates. UberGlobal officials told The Register The actual user, however, is ServersInseconds.com.au, which resells UberGlobal services but loads its own operating systems onto its servers. That OS is Red Hat Linux,.

Hackers defaced 30+ sites with the text above

ServersInSeconds.com.au owner Matt Goodwin said backups of the defaced sites are ready and that his team is working to restore normal service. Asked if he had any words for the Johor Hacking Crew, he drew a sharp breath, mastered himself and said he felt happier saying nothing, lest he again make the company a target. ®