IRS slurps over $2 TREEELLION a year of taxpayers' cash 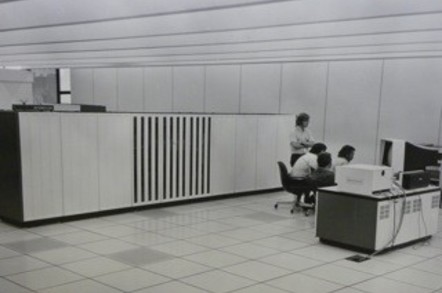 National tax collection agencies were among the first organizations in the world to use IBM, Sperry, Burroughs, and other mainframes, and despite all the grumbling and grousing over the high costs of these venerable box, they have invested a fortune in COBOL applications and it is not so easy to ditch the mainframe as it might seem. And it looks like the mainframe will be sticking around the US Internal Revenue Service for quite a bit longer, if a new support contract won by Unisys, worth a potential $650m over the next decade, is any indication.

In a statement, the mainframe maker and services supplier said it has been awarded the enterprise computing center support contract from the IRS. This is a tech support contract to cover Unisys ClearPath Dorado systems, which run OS 2200 and come from the Sperry side of the Unisys house, as well as other unspecified systems.

A Unisys spokesperson rooted around for some details behind the IRS support deal, and it turns out that Unisys is actually getting paid to support the entire Tier 1 mainframe environment, which includes System z and ClearPath Dorado machines running at the central facility in Martinsburg, West Virginia and a backup computing center in Memphis, Tennessee. The IRS has other servers, storage, and such at these sites, and Unisys is supporting these as well.

And, according to the Unisys spokesperson, IBM's mainframe rival is also being asked "to provide software license maintenance agreements for the IBM and Unisys operating environments" including provisioning of available product updates, version updates, release updates, product documentation, and access to technical support. And in the event that upgrades to the mainframe systems are necessary, or restructuring them to save money, Unisys will be handling this as well.

That's a very interesting twist in the contract, given that in September 2011 the US Treasury's inspector general for tax administration, J. Russell George, who was appointed by former president George W Bush and kept in that role by the Obama Administration, released a report saying that the IRS was watching the performance of its System z and Dorado mainframes like a hawk, but that it might be overspending by as much as 10 per cent because it has MIPS-based pricing on IBM's systems software rather than metered pricing.

That report also showed what iron the IRS has on its site, and projected that there would be a huge decrease in required MIPS on the IBM mainframes when the IRS shifted to a new master database for personal tax processing, called Customer Account Data Engine 2 (CADE 2), itself a kicker to an earlier unified database that the IRS has been working on since 2000 and use a relational database management system.

The IRS installed its first such sequential database – called Master File – on IBM systems back in 1962, which predate the launch of the System/360 mainframe by several years. This batch-oriented, sequential database is whacked by COBOL applications and was only able to do weekly updates to taxpayer information. CADE was able to do daily updates and was planned to be rolling out during the second quarter of the US government's fiscal 2012, which is about a year ago. CADE 2 was an improved version of this database.

So how much iron does it take to collect taxes from all of the individuals and business in the United States? Not as much as you might think. The IRS data center in Martinsburg has two System zEnterprise 196 mainframes, one with 8,800 MIPS and the other with 8,000 MIPS. The top-end zEnterprise has north of 52,000 MIPS and costs somewhere around $28.6m, so this pair of sysplexed machines can failover for each other. The Martinsburg machines run the old Master File as well as the CADE system and were slated to run CADE 2 as well, and interestingly, shifting to CADE 2 was going to free up about 8,000 MIPS of capacity on these core IBM machines. (Presumably through the retirement of Master File.) The Memphis data center had an IBM System z9 mainframe with a mere 900 MIPS, but this box was supposed to be upgraded last year to a System zEnterprise 196 to provide remote failover for the West Virginia machines.

At the time that the audit was done on the IRS mainframes by the inspector general, each center had a ClearPath Dorado 280 system, with the one in Martinsburg weighing in at 950 MIPS and processes data coming in from the ten regional IRS processing centers related to individual taxes, while the one in Memphis has 675 MIPS and takes in and processes data from the ten centers relating to tax collections from businesses. These machines were in the middle of being upgraded to more powerful Dorado 780 machines as 2011 came to a close and had plenty of headroom, apparently.

So that's the shape of the iron, more or less, as of a year ago, and given the budget crunch, it probably has not changed much. Rather than just give Unisys a blank check to provide support over the next decade for this mainframe iron, the deal is a bit more cleverly structured, which is good news for we taxpayers here in the States. Technically, this is a single-award indefinite delivery/indefinite quantity, or IDIQ, contract. The support contract is annual, with $14.6m being the base amount for the first year, and it is task-based, not time-based. So the more the IRS asks Unisys to do, the more it has to pay.

The IRS collected $2.52 trillion in the US government's fiscal 2012 ended last September, and had a budget of $11.8bn. The agency handles something on the order of 115 million calls from taxpayers and their accountants each year, and that was only 68 per cent of the calls that came in. It had over 1 million pieces of unanswered correspondence last year, according to a report by national taxpayer advocate Nina Olson. The IRS doesn't have a mainframe problem so much as a human being problem. Unbelievably, last year the IRS estimates that $400bn a year in taxes go uncollected. Congress and the White House are ready to grind the business of government to a halt for a far smaller fund.

By the way, Unisys had the prior ten-year contract for supporting the mainframe centers, and after losing a big chunk of Homeland Security money in 2011, getting the re-up for this contract is a big deal for IBM's much smaller mainframe rival. The remarkable thing is that IBM hasn't managed to steal this support contract away. It probably has as much with not putting too many eggs in the same basket as historical inertia and skill with mainframes. If Unisys didn't have the skills for both its own and Big Blue's iron, it wouldn't get the deal. That much is for certain.

The re-upped contract is also a big deal because Unisys needs money from Uncle Sam to make its numbers. Unisys came under fire back in September 2007 after 150 machines in DHS were breached by hackers. Despite those issues and losing some deals, a big chunk of the business that Unisys does with the US federal government is still done for the DHS, and last September Unisys won a $504m, five-year contract with the US Customs Service to develop and manage a risk assessment system for people and cargo entering the country. Unisys has had a similar contract for the prior 15 years. ®