Whitman: Absolutely not going to break up HP

The patient 'showed some improvement' in Q1 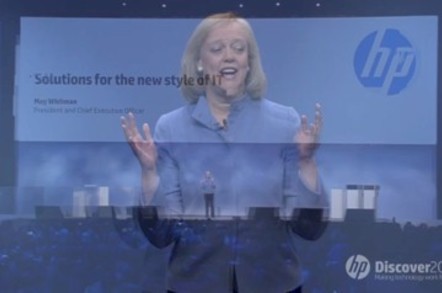 The rumors go 'round and 'round about HP spinning off its PC business or doing some other kinds of breakup, and CEO Meg Whitman put a stop to them – maybe for once and for all, maybe not – on a conference call today to discuss the company's financial results for the first quarter of its fiscal 2013 ended on January 31.

"We have no plans to break up the company, and I have said many times we are better and stronger together," Whitman said after the opening salvo in the question-and-answer session with the financial lairds of Wall Street. "We have a really great set of assets, and we are going to drive better performance. And importantly, customers want this company together. We heard that loud and clear in August 2011."

That, of course, was when ex-CEO Leo Apotheker bought Autonomy for a whopping $10.4bn and said it was considering spinning off its PC business, actions that were key to Apotheker being given the boot and Whitman taking over as CEO to clean up these and other messes.

What HP needed to have done during the era when Carly Fiorina and Mark Hurd were the CEOs – and what seems clear in retrospect – was to not have missed the smartphone and tablet waves, because the notebook PC business is cratering now both for HP and its main rival in the United States and Europe, Dell. Consumers are not buying as many notebooks, and they are buying cheap ones so they can also afford to buy a cheap tablet. Probably because their kids are nagging them.

In the first quarter of fiscal 2013, HP's Personal Systems and Printing Group posted sales of $14.13bn (down 7 per cent), and within this the Personal Systems division brought in only $8.2bn (down 8 per cent). Cathie Lesjak, HP's CFO, said on the call that "the PC situation" with regard to notebooks was worse than expected in the quarter, with even more drama in EMEA than in the rest of the world.

She added that the PC market for all vendors is contracting more than expected over the three months. And in a statement that is sure to make Lenovo gloat and Dell, the man, happy because it will help depress shares of Dell, the company, which he is trying to take private, Lesjak said that PC revenues at HP will decline faster for the rest of the fiscal 2013 year than they did in the first quarter.

It's already pretty bad. PC units were off 5 per cent across all types. Notebook sales were off 16 per cent to $4.13bn, and believe it or not, desktop sales actually rose by 4 per cent to $3.32bn. Workstation sales (which are counted separately from desktops because they come in both notebook and desktop forms these days) were flat at $535m.

Operating margins were $223m and have been pretty much going down at a 45 degree angle towards zero for the past four quarters. Due to the weak demand environment, aggressive pricing, and currency effects, Lesjak said that HP expects for margins to erode on a year-over-year in fiscal 2013.

But she would not say they would go to zero – although at this rate, they will be zero in two quarters.

That said, HP thinks it grew its PC market share by 1.4 points in the calendar fourth quarter of 2012, and gained 4.6 points of share, based on preliminary data it is getting from either IDC or Gartner – Whitman didn't say which data she was using to make that claim.

The printing side of this business hardly did better and was down on all fronts, with supplies off 5 per cent to $3.9bn, commercial printers off 9 per cent to $1.35bn, and consumer printers off 2 per cent to $679m. Operating profits had been on the mend here for the past four quarters, but took a bit of a dip back to $953m in fiscal Q1.

The newly constituted Enterprise Group, which takes the Technology Services part of the HP business that is fundamentally tied to hardware and systems software and moves it next to that hardware and software where it belongs, had its own issues in the quarter, with every business but networking taking a hit.

The Enterprise Group had sales of just under $7bn, with an operating profit of $1.08bn. That's higher than printers, at least, which is remarkable given how profitable ink is to HP, but it is also against a larger revenue base, too, and for products that are also (in theory anyway) inherently profitable.

The keystone Industry Standard Servers division, which peddles x86 iron, saw a 3 per cent drop in Q1 to just under $3bn. The Business Critical Systems division, which sells Itanium machines running HP-UX, NonStop, and OpenVMS continued to plummet, falling 24 per cent to $306m.

HP has a disproportionately large installed base in EMEA, and with overall server sales down there, the company is taking a big hit because of sluggishness in parts of the European economy. But Lesjak said that server sales in Asia/Pacific/Japan were up and did particularly well in China.

Hyperscale, dense-pack server sales had a tough compare with a Japanese company making a big order a year ago, but HP is prepping for the launch of its second-generation "Gemini" Project Moonshot servers, based on Intel's Atom processors, in the second quarter. These are being referred to as the "first commercial version" of the Project Moonshot hyperscale servers, which is sure to irk ARM server chip upstart Calxeda, which got its clever chips into the first-generation "Redstone" hyperscale boxes and then saw all the love go Intel's way for the Gemini machines.

That doesn't mean there won't be Gemini machines based on ARM chips. But it is likely there are many different options rather than one.

Lesjak added that the ProLiant Gen8 servers based on Intel's Xeon E5 processors were ramping (after what El Reg perceived of as a slow uptake relative to Dell), and that average selling prices were rising.

3PAR array sales were up 21 per cent, which is a good sign. The other storage saw a contraction of 21 per cent to $591m, and Lesjak said that the crossover point where the new stuff was growing faster than the old stuff was falling is coming soon.

Ahh, but will that mean the overall storage sales rise to former levels? Maybe not for a long time, if competition is heated in the storage racket. Odds are it will be.

Whitman said that the server business had stabilized a bit after HP got some peripheral attachment rates up and had better execution in the channel, so it could have been worse. HP expects to gain a point of market share when the fourth quarter of calendar 2012 data is out from IDC and Gartner for the x86 server space.

The Software Group had a 2-point decline to $926m, with double-digit growth for Vertica parallel database sales and security product sales. But operating margins were a relatively healthy $157m. The beleaguered Autonomy line, which wrestles with unstructured and structured data, "was beginning to stabilize," according to Whitman. Software license sales were down 16 per cent, which is not a good sign at all, and software support was up 11 per cent while services relating to software were off 8 per cent. HP has issues here, and it knows it.

The steady-freddie HP Financial Services unit had sales of $957m, up a point, and an operating profit of $101m. Nothing to complain about here, move along...

That leaves boring old services like outsourcing and other business services to run applications that were supposed to make HP a lot of money after it bought Electronic Data Systems. The new Enterprise Services group, clipped of Technology Services, is a lot smaller, and got even smaller with a 7 per cent decline to $5.92bn. Enterprise Services posted a skinny operating profit of $76m.

"I don't like the fact that we saw revenue declines in every category," said Whitman, and the heads of the employees of HPFS all cocked a little to one side. And a few minutes later, she said that "if I had to characterize it, I would say the patient showed some improvement."

HP cut 11,800 workers in fiscal 2012, and shed another 3,500 during the first quarter of fiscal 2013. It has another 11,700 to go to reach its goal of reducing the HP workforce by a total of 27,000 people, a plan that was announced in May last year. Those layoffs represented about 7.7 per cent of HP's workforce of 349,600 worldwide at the time, and make it hard to boost revenue even as the company is cutting costs.

Whitman said it would take until 2016 to turn the company around, and that seems to be a best-case scenario, with maybe one or two quarters of padding for upside surprise.