Clarkson: 'I WILL find and KILL the spammers who hacked me' 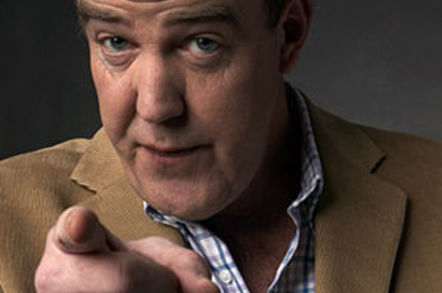 Motormouth Top Gear star Jeremy Clarkson has joked he will kill the spammers who took his Twitter account on a joyride to tout dodgy diet pills.

Several tweets appeared on his feed promoting miracle weight-loss medicine. But the stunt may backfire on the Twitter-jackers: rather than delete the spam and reset his password, Clarkson, who has 1.3 million followers, vowed to race after the miscreants and, er, kill them.

"I have been hacked by spammers" he admitted in a tweet, adding:

Luckily I have acquired a special set of skills over many years. I will find them. And I will kill them. Unlike some people, I WILL find who hacked my account. And I will visit them.

If Clarkson does manage to "visit" the hackers it will be a great feat of online investigation: hackers are likely to have taken various steps to anonymise themselves. And even if they could be traced, they are likely to be sitting somewhere abroad where controls on internet crime are low - and a foreign BBC presenter's attempt to commit murder would not be warmly received.

Clarkson's belligerent approach to online data hasn't always worked out his way - he once published his bank account details in a Sun column and dared readers to do anything with them. One subsequently subtracted £500 from his account and donated it to a charity via direct debit.

Twitter hacks to flood feeds with unwanted adverts are relatively common, and spam touting diet pills made from Acai Berry has been kicking around for a while.

Former Dr Who actress Karen Gillan, who played Amy Pond in the series, was stung by a similar diet-pushing spambot. She did not respond to the intrusion with threats on the lives of the perpetrators. ®