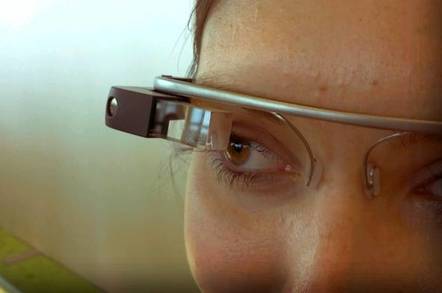 Google has been talking up its augmented-reality specs, dubbed Project Glass, for the past year. Now its hype machine has kicked up a notch with a competition on social media to allow members of the public to get in the queue for the $1,500 prototypes.

The wire and screen glasses are one of Sergey Brin's pet projects and there's hardly a public event these days where he isn't seen wearing them. At last year's I/O developer conference, two freefallers fell from the San Francisco skies while wearing the specs and streamed the entire event into the keynote session.

Google cheerfully took $1,500 apiece off a few thousand developers at the show who wanted to be the first to get the new hardware. They are still waiting, but now you too can join the queue to become a Glass Explorer – if you praise the Chocolate Factory's latest creation online.

"We're looking for bold, creative individuals who want to join us and be a part of shaping the future of Glass," said the company on the revamped Project Glass website.

"We'd love to make everyone an Explorer, but we're starting off a bit smaller. We're still in the early stages, and while we can't promise everything will be perfect, we can promise it will be exciting."

Paeans of praise should be limited to 50 words or less, with a limit of five pictures and 15 seconds of video, and should be posted on Google+ or Twitter with the hashtag #ifihadglass.

The lucky few US residents that Google approves of will then fork over $1,500 plus tax, after which they will be able to pick up their glasses at an undated launch event in San Francisco, LA or New York. No release date has been given other than early 2013, and Google has not said how many devices it plans to sell in this way.

To inspire you, Google has released a video showing just how wonderful life can be if you add very expensive wire-frame glasses to your life. Suggested applications include starting a Google hangout while you're flying a plane, recording a spin on the flying trapeze, and initiating video chats by voice command.

With social media being what it is, the results so far are a mixed bag. Some developers are suggesting mashups with their own pet projects, while other suggestions range from the trite to the technically interesting. One Microsoft systems engineer came up with a deliciously naughty idea, although sadly he forgot to submit it for the contest.

Microsoft, of course, has its own ideas as to what augmented reality glasses should look like (according to patent filings made so far) and sunglass manufacturer Oakley want to get in the game, as well. Some of Google's ideas for the glasses look promising, but here at El Reg we're taking a skeptical line.

The glasses are a cute idea, but $1,500 is a lot of money to splash out on prototype hardware and there are some basic problems with the concept. No one really likes to wear glasses at the best of times, and the voice command system has the potential to be very frustrating. We suspect wearers will also be viewed with some suspicion; after all, they might be recording you or just spacing out of a conversation to catch up on Family Guy.

Muggers are going to love them, however – you’re walking around with the value of a MacBook Pro on your face that can be easily snatched, and the access the glasses have will mean identity thieves could have a field day. Using them if you already wear spectacles might also be a problem.

But despite the downsides, there's a lot to be said of the concept in terms of making computer and internet access pervasive. Google is warning "there will be bumps" with the design, but it looks committed to making the system work. ®