You might think that wireless options could work but apparently their use is kept to a minimum to avoid interference. For boy bands wireless microphones appear occasionally but for TV, the operator with a steadycam and a camera running around for interviews are the only likely exceptions. Generally, cameras are on cables and the operators also have a cable puller – someone whose job is to take up the slack over the course of an event. 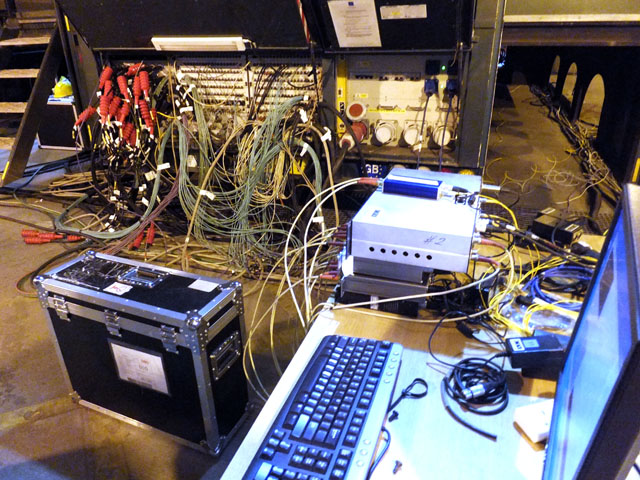 And talking of events, back to the main event itself. Freelancers dominate the industry these days as the major broadcasters seek to cut costs. Only the key personnel related to the OB team will be staffers such as the chief engineer, unit manager and a handful of other staff everybody else is a freelancer and that includes the main audio and vision mixers, camera operators, riggers – some double as rigger and camera ops too. Few network broadcasters have OB trucks, Sky has some but the BBC’s fleet of outside broadcast vehicles were sold off to SIS in 2008. The BRIT Awards is an ITV event and the hired hand lead broadcaster on this occasion is CTV. The company provides everything to cover the show and from its outside broadcast facilities will pump out the finished product for ITV’s network going via BT Tower. 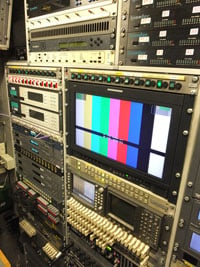 Indeed, in the OB compound is a BT Openworld broadcast truck that, among other things monitors signal integrity before sending out an ASI MUX signal to the BT tower for distribution – ASI is the streaming version of SD/HD-SDI. Handling the data stream for the event is pro cast links engineer Raj Purohit who explains that even though there are two 270Mb/s connections available, ITV only requests a 90Mb/s data stream. So there's plenty of capacity on these lines and he has a back-up arranged on the second line which also feeds ITV 2. During the broadcast he uses a handheld Dolby Bitstream Analyser to check for CRC errors coming from the production output.

Being a one-off show, the audience display panels – the big screens to show the people at the back what’s going on – will also be run by CTV. However, touring bands will bring in their own camera team for this video display which is run from separate vision mixers as well. Even if a band’s performance is being televised, the images shown to the audience would be entirely different. One area where things don’t differentiate is sound. OK, so the front of house (FOH) mix to the audience will be different to the one that goes out on air, but both PA and broadcast sound engineers receive the same signals. It involves another patching job for Clerke and co. 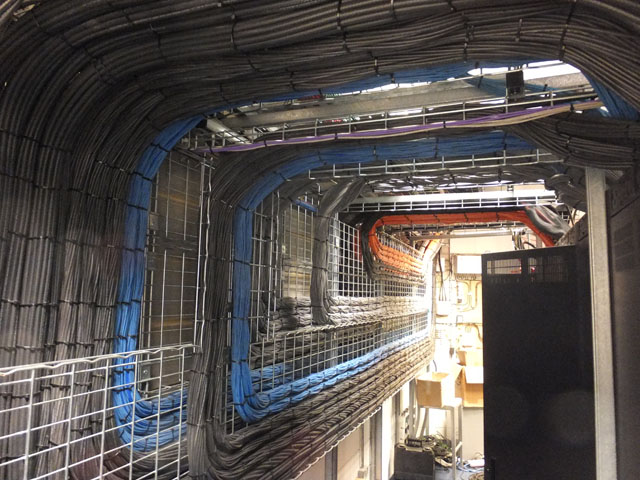 Cable TV? The back of the Arena patch room

“Every mic on the stage is split. All the outputs go to the house PA mixer, all the splits go to the OB truck. Normally, these feeds are on fibre these days and something like the BRIT Awards will be 128 to 256 feeds. With 8 or 10 bands, the drum kit alone will have 8-10 mics and on stage they may have 20-30 mics in total, so you just give them their own bank of controls on the mixing consoles. You can set-up the mix for them and leave it. So there are two main mixes going on: one for broadcast the truck is doing and another mix the house is doing for audience going out on the PA, plus a stage monitor mix so the band can hear themselves."

Making things easier still is the fact that the bands’ equipment is lined up behind the stage on palettes. One act after another, they just roll them out and wheel them in. As for sending the audio down fibre optic cable, this involves conversion too. For fairly self-explanatory reasons, multicore cables are referred to as ‘snakes’ and, in times gone by, a of run around 96 lines back to the OB truck wouldn’t be unusual, which is quite a pile of multicores. 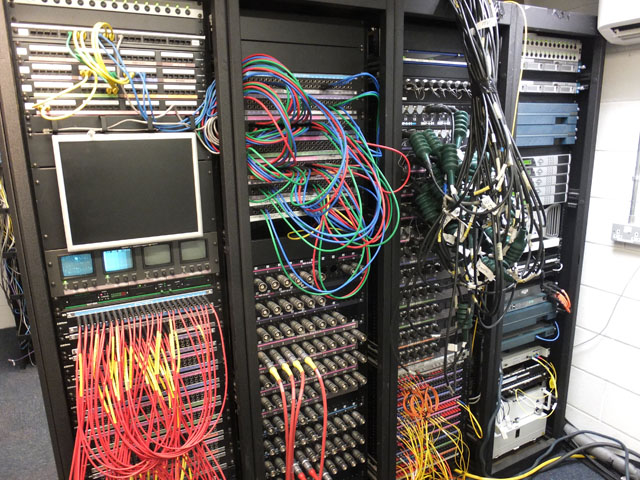 The OB compound has its own patch room and with those pricey SMPTE 304M patch cables in short supply, some trucks are bypassing the media panels and connecting directly to the third rack here. The fourth rack contains media servers for separate video feeds via Cisco DMP 4300 IP set-top boxes to the 360 Sony TVs in dressing rooms and public areas

Nowadays, using off-stage boxes such as Telecast's Adder for A/D conversion of the mic and other audio sources is performed to output the multichannel audio down just one bit of fibre, from one media panel to another at the other end with Adder D/A conversion as needed. Telecast also makes the Python converters for video HD/SDI to and from optical, to make the most fibre cabling. Given the various conversion stages for both audio and video, timing can be an issue. Audio conversion takes only microseconds, so it’s imperceptible, but some video configurations can be a bit tardy.

“You're allowed two frames between realtime and video before you start noticing timing issues and you need to keep within that window,” says Clerke. “Video processing can take a frame or so, and there’s normally a 32-line window on a video mixer. If you have a frame delay in vision and none in audio, that could be an issue, and so it’s sometimes necessary to time everything up in a truck to make sure everything gets to the right place at the right time.” 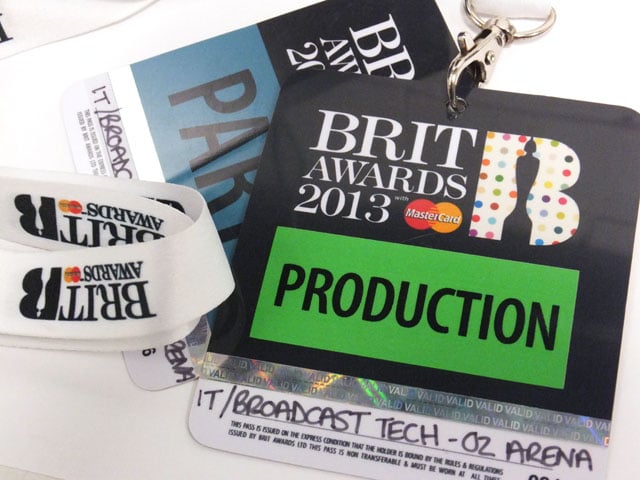 Access all areas, apart from a table at the show

Indeed, with a live event like the BRIT Awards, timing errors looking like dodgy miming wouldn't win you any friends among the performing artists. Other timing issues are critical too, as The BRIT Awards goes out on ITV, the ad breaks need to be fitted in with the 7.30pm to 10pm programming schedule. The news follows at 10pm and that’s a deadline that’s written in stone.

Still, if the event does run over, the action will be recorded too on EVS equipment – a popular broadcast hard disk recording system. Not only is it a failsafe approach should there be drop outs in the broadcast network, but content is kept for documentaries and archives too. Whether we’ll witness anything like Jarvis Cocker’s stage invasion during Michael Jackson’s BRIT Awards appearance back in 1996 remains to be seen, but you never know. ®