Clash of the Titans: Which of you has the GREATEST HOME LAB? 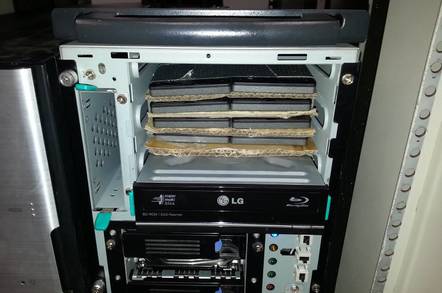 Last week's article about home labs and their career-enhancing powers produced some interesting comments from readers about their home labs.

That got us thinking: in the spirit of our infamous Ventblockers series, in which readers sent in gut-wrenching photos of filth-laden IT kit, what about a servers'n'sofas challenge to show off the best home labs?

We're optimistic there are some good ones out there.

Commentard “dogged” boasted of his:

“Two HP boxes, a Mini running two debian VMs and a Mediasmart 495 (hardware hacked for decent chip and 8GB of RAM) running Windows Server 2012 with one extra 2012 VM for exchange and SQL.”

An anonymous coward claimed to have:

“[A] fully populated 47u server, with network aware ups, terminal server, kvm with remote links and a raft of servers, each running different flavours of unix natively … and a LTO drive with carousel mechanism.”

“[A] Stratum 1 NTP [network time protocol] server, not because I'd need it on the job, but because I'd like to have the precise time. I find it cool that the computer which does my video recordings knows the time with an uncertainty of a microsecond. It's something I care about.”

Others get by with a hefty laptop, loaded with RAM and virtual machines a-plenty.

To play the servers'n'sofas challenge send photos of your home labs here, accompanied by full specs of course. We'll publish the best of them. Or use that link to tell us why the whole idea of a home lab is wrong in these cloudy days. Then send screenshots and full details of your cloud rig, or at least its management console, so your Reg-reading brethren can coo with awe at your virtual might.

There might even be a [virtual] Reg goodie bag in it for you, though such a paltry reward would of course pale into insignificance alongside the chance to have one's name inscribed forever in the Register home lab hall of fame. ®