Time to rid ourselves of the tech channel zombies 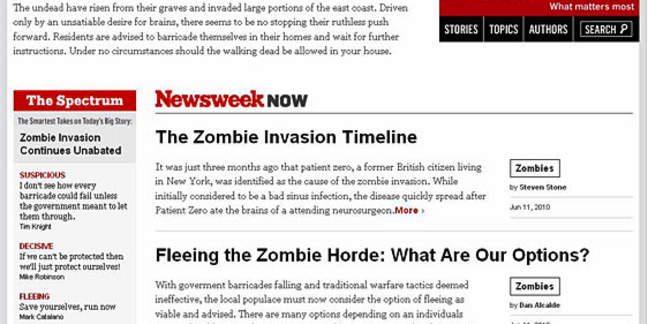 One thing is certain, we’re all going to die at some point while encountering high and low points along the way. Life is a journey, with no guaranteed time of departure. And business is no different.

The loss of names such as Woolworth, Clinton, Jessop, Comet, HMV and now Blockbuster may be sad, but it’s also part of the journey of life, albeit with a diversion down the High Street.

But I can’t recall the last time I bought a card to celebrate any anniversary or hired a video/CD or DVD. I’ll take a stab and say sometime around the 1990s.

I also can’t recall ever walking out of a Comet store with an actual purchase, invariably I was told there was no stock and I could order online. To suggest therefore that businesses like these have been decimated by the "digital" age or internet shopping is prime BS. Blockbuster may have had a more serious issue in trying to flog second-hand kit but the underlying reason for business collapse of these famous names, along with others like Kodak, are a failure to foresee current and future market trends and demand or obsolescence of their product and services.

In an earlier article I spoke of the demise of "the man with the gong" in the film industry. These recent failures are similar examples of business models that simply failed to react swiftly enough to consumerism and the relentless march of technology and the effect it has on almost every living moment of our day.

In many, the reason for failure is directly attributable to exceptionally short-sighted senior management with no sense of direction and the assumption that their name or size is robust enough to see them through. In others, it is a reality that 80 per cent of what they do is no longer required, or at least not the way they’ve been doing it.

These are "buffer" companies. The track has run out, the brakes don’t work and the end result is going to be smashing. Few of these can reposition in time but this is not to say they can’t. Amazon was an early "suspect" online book-seller but not only survived the dot.com bubble burst, but grew to be a giant. Another example is Unipart Group, a now successful business that does infinitely more trade than it did when part of that old chestnut we all loved to hate, British Leyland.

We can all (well certainly those of a certain age) recall things we liked but can no longer find. I got a bicycle last year, the first time I’d ridden one since 1969 - and I lamented the loss of the old-fashioned light fitting with wire running to a dynamo that rested on the rear wheel. But modern day halogen bicycle fittings are just as good and less fiddly to work with, and besides, street lighting is more evident these days. My first transistor radio was a snakeskin-covered model made by Phillips (It was cool and hip then). My collection of vinyl records, including a special edition boxed set of Black Sabbath, remain sadly hoarded in a cupboard. Sure, one can find "specialty" shops and products that still service or deliver products of old but their specialty status arises precisely because mainstream has left them behind. As for my cassette and video collection, it ended up in Kew’s recycling plant.

The world moves on and we must stop blaming new technologies for changing the way we live our lives. We’d be much poorer without them (thought I must admit to hanging on a pocket-sized Panasonic transistor radio in its original leather pouch and earpiece accessory - it’s great for listening in to police wavebands).

Strategically, IBM offloaded its PC division to Lenovo some years ago, not just because it was not making enough money for Big Blue but because it felt that building PCs was not an activity it wished to participate in. And it was an astute move given declining PC sales in the face of massively growing tablet expansion. Dell is also looking to move away from its PC business but its decision to be more "channel-friendly" had more to do with bolstering numbers in one area to offset decline in others than a serious desire to alter its direct model. HP and Lenovo are battling the top spot in PCs but rationally, while others leave the field and those remaining increase market share, this can surely only be a temporary uplift in an otherwise undeniably diminishing activity. For these traditional players, it will be an almighty if nigh impossible struggle to match the likes of Samsung, Google, Amazon or Apple.

But asking government, consumers, suppliers, insurers, or banks to intervene and support the "living dead" either in High Streets or elsewhere is totally wrong. These are not pods of stranded dolphins or whales but inanimate, unfashionable and defunct business models that cause more harm if assisted to limp along. They should be allowed to fail. Insolvency statistics show slower business failure but this is entirely down to banks being less enthusiastic in calling in loans, a rise in corporate voluntary arrangements and administrations and the removal of HMRC’s status as a preferred creditor. This is not good for business.

The harsh reality is nothing stays the same. When I had a full head of hair and in my teens, Brylcreem did pretty well out of me as did Old Spice, nylon shirts and Rothmans. All these brands surprisingly are still around but let’s stop bitching about change and the demise of businesses that simply should in all fairness wither and die in any event.

Am I any better for having no hair? Sure, it saves on Brylcreem and barber costs and giving up cigarettes has stopped the daily morning grind of coughing, saved me a fortune in soap washing out stains on my fingers and has probably added 10 years to my life. As for nylon shirts, the static electricity generated was a killer, and they made me look like a zombie.

Like my mixed tapes, these tech channel businesses need to Rest in Peace. ®