Intel backtracks on 'Kittson' Itanium plans, including shift to 22 nanometers 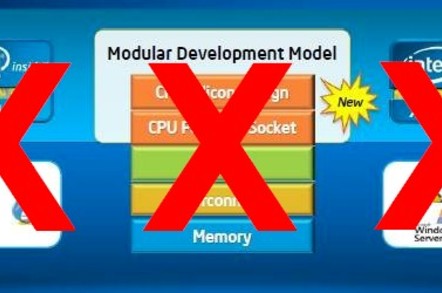 If you are an Itanium shop and you were hoping for a big upgrade in performance with the future "Kittson" Itanium processors around two years from now, it looks like you can forget it. It ain't gonna happen – and you can also delete from your memory the idea of a common socket for Xeons and Itaniums.

On January 31, on the Itanium section of its web site, Intel put out the following statement, and it went out of its way not to make any noise about it, presumably hoping no one would notice:

Intel has updated the definition of the next generation Itanium processor, code name "Kittson". Kittson will be manufactured on Intel's 32-nm process technology and will be socket compatible with the existing Intel Itanium 9300/9500 platforms, providing customers with performance improvements, investment protection, and a seamless upgrade path for existing systems. The modular development model, which converges on a common Intel Xeon/Intel Itanium socket and motherboard, will be evaluated for future implementation opportunities.

This development – or more precisely, the lack of it – will no doubt greatly annoy customers of HP's HP-UX Unix variant as well as those customers who use OpenVMS and NonStop machines from Big Meg. The handful of makers of mainframe and proprietary boxes that rely on Itanium engines, such as Bull and Inspur - NEC just moved back to proprietary CPUs last fall, funny coincidence that - will no doubt be annoyed, too. And not just because the converged platform plan that Intel only just revealed in early November when Chipzilla launched the eight-core "Poulson" Itanium 9500s are now undone.

When pressed about it, an Intel spokesperson tried to downplay the change in plan for Kittson, saying that it was for a product that was two years away and about which very little was revealed. And additionally, he added, the plans were modified "reflecting the needs of customers and the needs of the Unix market."

It is hard to imagine HP not wanting a converged Superdome 2 and Integrity blade platform that could use either Itanium or Xeon processors, but that is what Intel is saying. It is also hard to imagine customers not wanting clock speed and cache memory boosts two years from now.

Those Poulson Itanium 9500 chips were implemented in a 32nm process and are socket compatible with the earlier "Tukwila" Itanium 9300s (what happened to the Itanium 9400s?), which themselves were late to market by at least two years and had numerous revisions and socket changes.

Having socket compatibility between future Xeon E7 and future Itanium processors was good for server makers who peddle Itanium iron – this means mostly HP, given that it represents the bulk of Itanium processor sales, and most of them are driven by HP-UX – because it would allow them to create a single high-end server platform and plunk in either Xeon or Itanium chips.

Intel has been whispering about this common socket since 2003, when the original "SledgeHammer" Opterons debuted from AMD and scared the bejesus out of Chipzilla. Depending on who you believe and the rumors running around nearly a decade ago, the Tukwila chips as originally conceived were supposed to share a common socket with Xeons, not just the QuickPath Interconnect and a chipset as Tukwila and Poulson chips do today.

Intel has de-converged the Itanium and Xeon roadmaps

For reasons Intel never explained, socket convergence didn't happen with the original or the reworked Tukwila chips, which debuted finally in February 2010. The original Tukwilas were expected in 2007, and were delayed for a number of reasons – more recently in 2009 to make the Tukwila chip socket-compatible with the Poulsons.

An earlier Tukwila design, oddly enough, was to be incompatible with the prior "Madison" Itanium 2 and "Montecito" Itanium 9000, and the sockets to be used for the then-future Poulson and still-future Kittson Itaniums, and any Xeon processors in the pipeline. Hard to believe, but true.

No, that doesn't make a lot of sense from the outside of either HP or Intel, and heaven only knows what machinations and arguments went on between Chipzilla and what was once Big Mark and then Big Leo (for a short time, anyway). We'll never know unless Oracle dumps a whole lot more internal documents out there on the intertubes.

HP was certainly not going to be drawn out about any of the recent talks that certainly must have gone on to first get Intel to talk about the convergence plan last December that resulted in this change of plan announced (if you can call that statement an announcement) on January 31. Here is the statement that HP's PR machine sent off asking for some explanation as to how Intel's change in Kittson plans affected HP's Superdome 2 and Integrity blade server products:

On January 31, 2013, Intel posted a statement on intel.com, providing an update around its plans for "Kittson", the codename for Intel's next generation Itanium processor. HP and Intel have a long history of working together on Itanium processors and Integrity systems to deliver mission-critical infrastructure for the world's most demanding applications.

HP is committed to the Integrity product line, including ongoing innovation and development of a new line of Kittson-based Integrity systems in the future, working closely with Intel. The recent statement by Intel has no impact on those plans or on HP's ongoing commitment to our mission-critical customers.

Well, that is interesting, but it misses the point.

The Kittson plan was not just about moving towards a common socket between Xeon and Itanium and using a modular development approach for system components like motherboards, memory cards, and so on as well as re-using on-die components where appropriate. Kittson, most importantly, was supposed to move to the 22nm Tri-Gate processes on which the "Ivy Bridge" and "Haswell" Xeons will be etched, allowing for a process shrink from the 32nm processes used with the eight-core Poulson Itaniums. A process shrink is important to customers because it allows Intel to jack up clock speeds and add cache memory and other features to the die.

What Intel seems to be incapable of coming out and saying bluntly is that there really is no Kittson chip any more, but rather a Poulson+ chip implemented in the same 32nm processes and having the Kittson name slapped on it. Maybe there will be some architectural improvements, maybe some deep-bin sorting for more clock speed. But essentially the same chip.

If HP hadn't blown so much money on Autonomy, it could pick up AMD for a song and get a future ARM server chip maker in the bargain, tell Intel to go straight to hell, and design whatever processors it damned well felt like designing.

Now that would be a lot more fun, and truly disruptive.

One can only hope that HP has some rights to the Itanium masks, and if not, Intel should just let go of them and let HP do the designs and Intel do the fabbing of future Itaniums that do indeed share common sockets with Xeon E7s. (Maybe there are no future Xeon E7s, and that is the real problem. Now there is an interesting thought... )

Bah! None of these more interesting options will ever happen. HP's ProLiant and BladeCenter server businesses and its PC business are all too intimately linked with Intel. It is Chipzilla that's calling the shots, not HP, and that's what happens when you don't control your own chip development. ®