We get a few details on stand-alone SANtricity silo 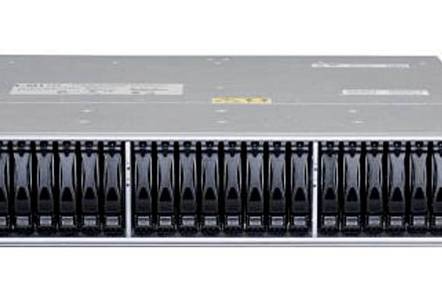 NetApp is going to introduce the NetApp Flash Array, an array using up to 24 SSDs and running the SANtricity (PDF) operating system rather than DataONTAP.

The tech giant has been signalling for the better part of a year now that it will be expanding its flash technology offering and working on a few in-house flashy developments, but how will this new product fit in with that?

We have been seen a product brief and it tells us the array has a dual-active controller design with 24GB of memory, and comes with either 12 or 24 800GB SSDs in a 2U rack enclosure The raw flash capacity is either 9.6TB or 19.2TB and the array's bandwidth is 6Gbit/s. It can deliver up to 350,000 IOPs and 300,000 sustained IOPS.

The documentation claims the array "delivers the performance of over a thousand 15,000 RPM drives while taking up just 5 per cent of the rack space, power and cooling." However, its capabilities do not measure up to those of NetApp's MARS project which we described in December last year.

Candidate drives for the flash array are:

Unlike a ground-up designed and written flash array operating system, SANtricity, the storage management O/S for NetApp's E-Series arrays, is tried and tested and provides:

The high availability features include:

There appears to be no deduplication, no replication, no compression, no encryption, no clustering and no VAAI support at this stage in the product's life. The documentation we have seen makes no claims about any DataONTAP integration or scalability.

How does the NetApp Flash Array compare to other all-flash arrays? The table highlights some of its attributes as compared with several of its competitors, including Greenbytes, Pure Storage, Nimbus, SKyera, SolidFire, Violin and Whiptail.

Click on this for a larger, more readable version

The positioning of the product as a SAN-attached flash array to accelerate the execution of applications requiring the fastest storage response and lowest latency but without back-end storage array integration is typical in this product area. Only HP has a pronounced back-end array integration strategy.

There are a number of optional software products for the E-Series and these may be made available for the Flash Array by NetApp:

The El Reg storage desk views this as a version 1.0 product with much more functionality to be be added in later releases.

We have no pricing or availability information and NetApp traditionally does not comment on speculation about forthcoming products. ®