Is it a tablet? Is it an Ultrabook? It's up to you 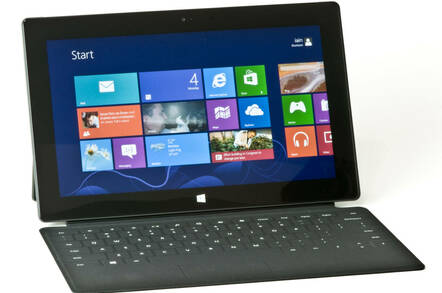 While the Surface RT was aimed at Apple's iDevices, its posh Pro cousin is Microsoft's Windows 8 showcase in the PC space, and on midnight on February 9 the first units will go on sale. But we got one early, lived with it for a week, and have, ahem, surfaced to tell of our experience.

Microsoft is adamant that the Surface Pro is not just another consumer fondleslab that's to be used as a second-string consumption device, but is instead a fully functional Ultrabook in its own right. While the company has Pros in the field with engineers, it's most likely aimed at the executive who wants an exceptionally mobile laptop along with Windows and all its applications.

Redmond has been making private and public complaints about the lack of touch systems out there to support its latest operating system, and about OEMs' unwillingness to gamble on people willing to buy into Windows 8.

On a corporate level, Microsoft has no doubt seen how corporate types using iPads have insinuated Apple into the heart of what was once solid Windows territory, and Redmond is hoping the Surface Pro will bring management back to its core software stack.

The Surface Pro is Microsoft's attempt to show the rest of the manufacturing world how it's done, and for the last week The Register has had a unit to examine to see if they've succeeded. As well as poking and prodding the thing, we've done some usability testing to see if Surface can stand up as your primary system. 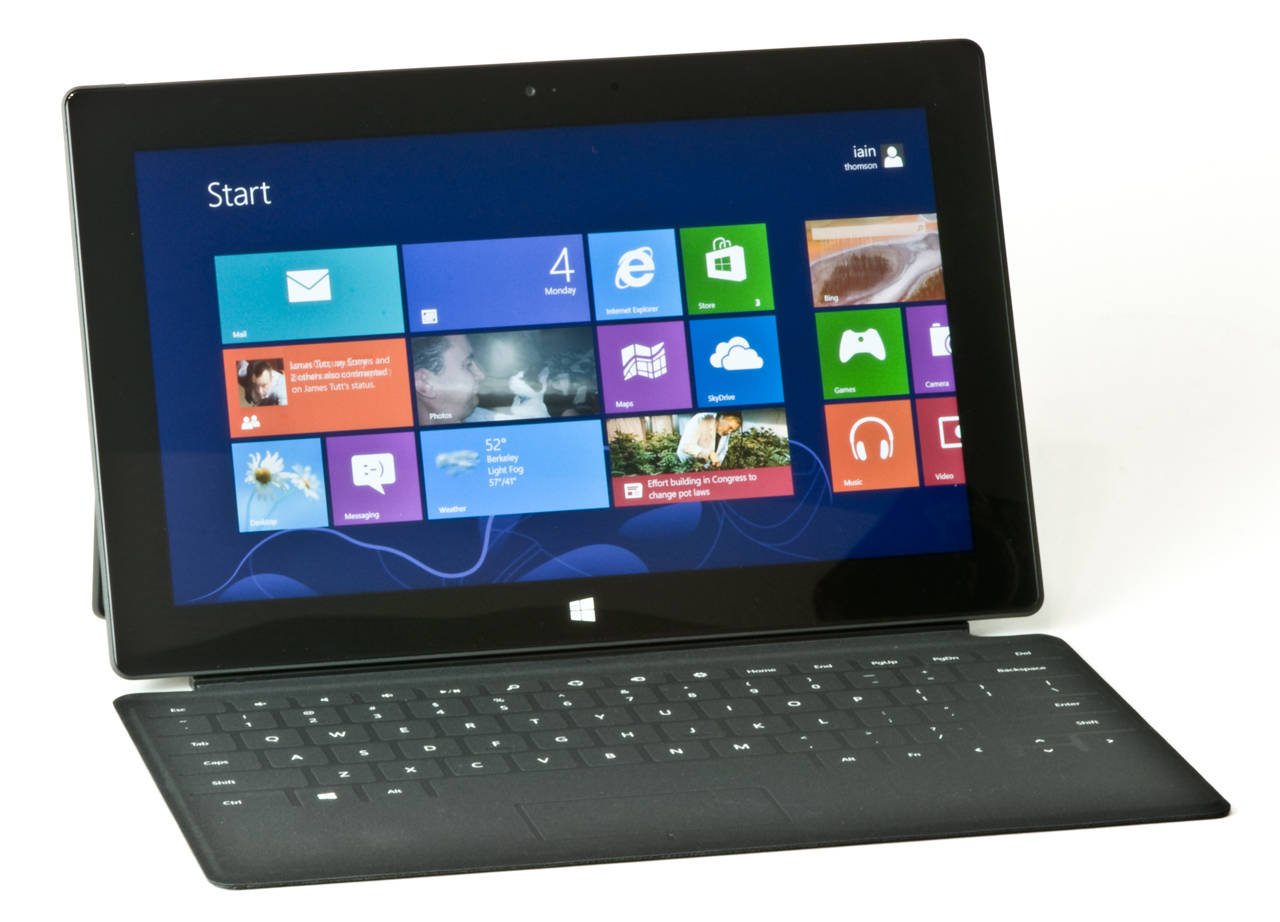 This isn't a review of Windows 8 per se, since the operating system has a few minor tweeks for the Surface Pro but is otherwise the same as you'd find on any new computer. Rather it's a look at the Surface itself, what's under the lid and, crucially, how easy it is to use in the real world.

The Surface Pro hardware is available in two standard fondleslabs, with 64GB or 128GB of solid state memory (more on that later), and priced at $899 and $999 respectively. Both come with a Wacom-based stylus.

The 128GB test unit Microsoft sent us is powered by a third-generation Intel Core i5-3317U running at 1.7GHz with 3MB of cache backed up by 4GB of dual-channel RAM. The processor started shipping around the middle of last year, and Microsoft says that newer processors will be added as they become available – presumably it's high on the list for Intel's forthcoming fourth-generation "Haswell" processors.

But with the i5's grunt comes a resulting heat penalty, and so the Surface has a cooling vent built into the top rim of the chassis. Inside the tablet, twin fans work in concert with the unit's internal sensors to determine where the top is at any given time and direct airflow upwards and outwards for maximum efficiency. 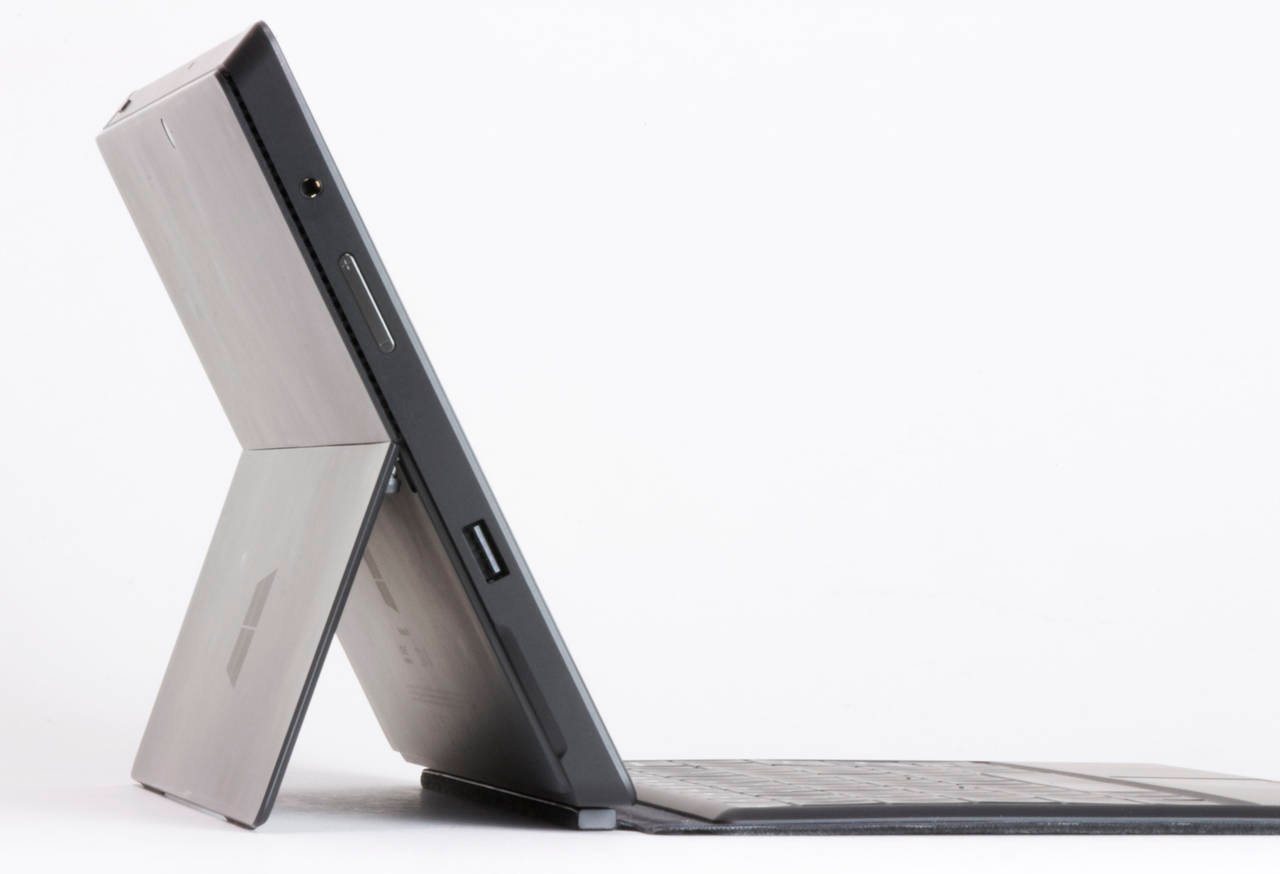 With no Ethernet, the Surface uses 802.11 a/b/g/n Wi-Fi with 2x2 MIMO antennas, and these are excellent at picking up strong signals over considerable distance. There's also Bluetooth 4.0 that can handle 3Mbps traffic, and crammed inside the case are an accelerometer, gyroscope, and compass, and an ambient light sensor to manage the display settings on the fly.

The Surface has a bonded 10.6-inch 1920-by-1080 pixel display capable of 10-point touch, which provides a 9.2inch viewing area. The Surface's Intel HD4000 graphics engine can also display 1440-by-1260 pixels on a conventional desktop monitor using the Mini DisplayPort connector in the bottom left of the tablet's case.

At the top of the screen there's a front-facing 720p camera for video calls with a rear-facing twin on the other side of the case for those annoying people who like to use a tablet as a camera. On the bottom bezel there's a touch-sensitive Windows button to bring up the home screen. It's not the greatest of cameras, as our test shot using the rear-facing camera shows, but it's good enough. No animals were harmed in our testing of the camera, but a small black cat was slightly peeved. 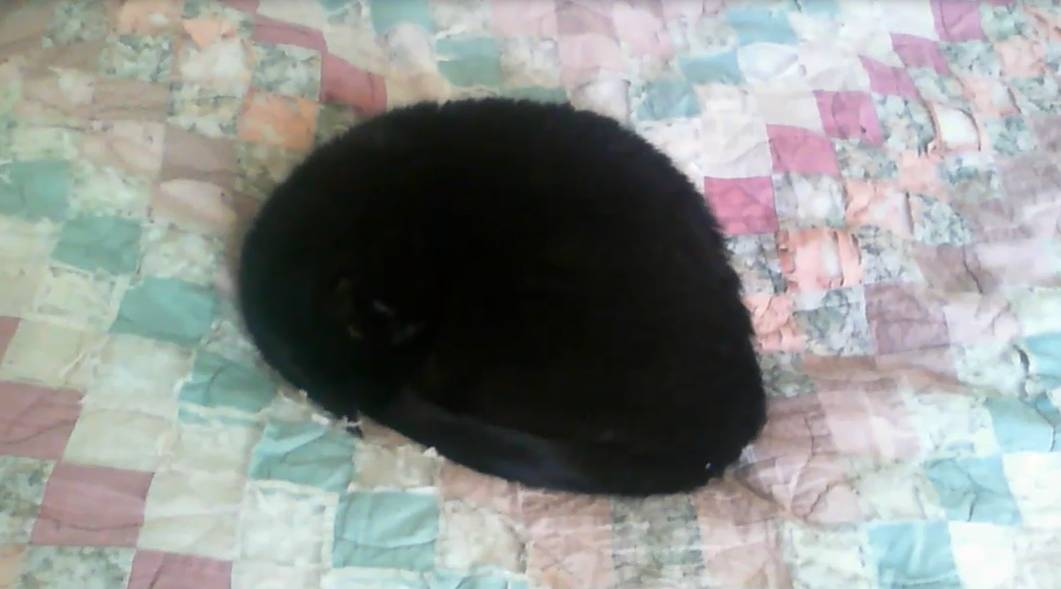 The ultimate test, a sleeping black cat (click to enlarge)

Microsoft is proud of its custom VaporMg magnesium-alloy case, in which the entire shell is injection-molded from liquid metal and then polished up. According to its engineers, the Surface has around 200 parts inside, 150 of which are custom-made, and Redmond says it has its own factory in China doing the assembly.

At two pounds it's weightier than many tablet-users would like, and the trapazoid-profile unit measures 10.81 x 6.81 x 0.53 inches at its tips. As with the RT unit, the Surface Pro has a kickstand for viewing or use with the keyboard. The screen viewing area is good enough, so you're reasonably flexible about where you sit when the kickstand is deployed, but using it with a keyboard in Cattle Class on an American airline could be problematic.

The power slot uses a magnetic connector similar to Apple's second-generation MagSafe power connector, and this doubles as a fixing point for the Surface Pro's stylus, which is built using Wacom technology and uses a pressure sensitive tip to act as a mouse, and has a button on top that can be programmed to erase doodles. The Surface is also heavy enough that you can use it as a graphics tablet without it sliding all over the table like lighter fondleslabs.

Built into the left side of the casing is a full-sized USB 3.0 port (very welcome and still ridiculously rare), a volume rocker, and 3.5mm headphone jack, with the power button and microphone on top. On the right is the Mini DisplayPort and power port, with a microSD card slot above – and you're going to need the latter given the size of the available storage space.

Our 128GB test unit came with 86GB of free space, so it's logical to assume the 64GB version will have a little over 20GB for buyers to play with. You can pick up a 32GB microSD card cheaply enough, 128GB versions are coming soon, and SanDisk say the technology will scale up to 2TB, so a card wallet is going to be a necessary accessory for power Surface users.