Tablets BEAT DOWN laptops in 4-to-1 Xmas bloodbath - analyst 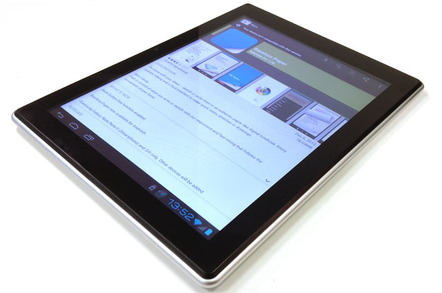 Bow down before the might of the tablet. If you were unsure who is the master now, look no further than numbers from the UK wing of GfK, a market watcher which tracks over-the-counter sales.

According to its data, more tablets were sold in December 2012 - no doubt as Christmas prezzies - than notebooks purchased in October, November and December combined.

Tablets were the stars of the Christmas month. They outsold laptops by approximately four to one, GfK said, and TVs by around two to one.

In part, that growth came about because tablets came down in price - they were about 23 per cent cheaper, on average, during 2012 than they were in 2011. That was due to the flurry of releases of smaller devices, typically seven inches in size.

And there are more companies hopping on the bandwagon too. “We are also seeing 52 per cent more brands competing in the tablet market, and 126 per cent per cent more models available to the consumer in 2012 compared to 2011,” said GfK’s Robyn Tovey.

“It seems likely that these trends will continue in 2013 as the lower prices in this product group have made buying a tablet a more viable purchase for many consumers."

The explosion in tablet sales contributed to a huge 18 per cent value increase between December 2011 and December 2012 for IT products as a whole - despite many once-staple technology products declining in both value and volume.

And folk are buying cases too. The tablet boom has had a direct impact on another product category: luggage. GfK separately said sales of tablet cases were up 174 per cent in 2012 and up 144 per cent by value over the same period. Tablet cases now represent 47.9 per cent of the laptop bag market value, up from 25.8 per cent in 2011. ®