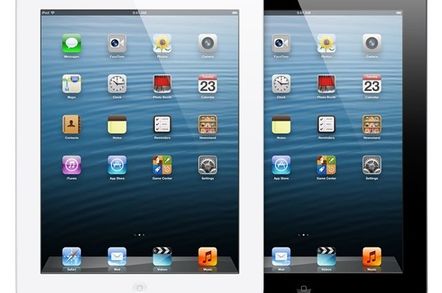 Apple has slapped an extra 64GB - and a $100 price increase - on its fondleslab range to create the 128GB iPad. An announcement today from Cupertino confirms the device's existence after references to the hardware were found in the newly released iOS 6.1.

The new iPad will be available from US Apple stores, the company's website and selected resellers on Tuesday, 5 February. It comes with Wi-Fi or Wi-Fi and cellular connectivity, and in black or white. The Wi-Fi-only version will cost $799, and the mobile-network-enabled slab will cost $929.

Otherwise the specs for the 9.7-inch tablet and its Retina screen remain the same. The 64GB version is priced at $699 and $829 for Wi-Fi-only and Wi-Fi+cellular, respectively.

Taking a pot shot at the ailing desktop computer market, Apple marketing veep Phil Schiller suggested iPad owners could use the extra space on their tablets to store all their work and media without needing "their old PCs”.

And it's not just fanbois carrying around multi-gigabyte HD videos of Lord of The Rings that Apple wants to target. The secretive company aims to deepen the iPad's reach into the professional market, too. Schiller claimed the extra storage is ideal for customers who use 3D design tools, CAD and other such packages.

No news* on when the data-hungry device will be available in Europe. ®

* We learned after publication that the iPad 128GB will be available in Europe from 5 February. UK pricing will be £639 for the Wi-Fi-only model and £739 for the mobile network-enabled tab.