Climate shocker: Carry on as we are until 2050, planet will be fine 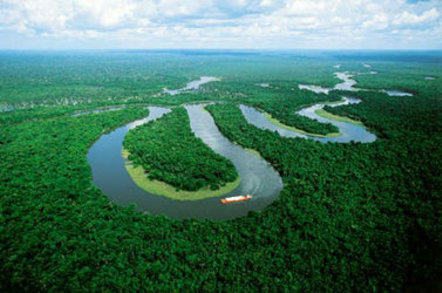 Opinion New research produced by a Norwegian government project, described as "truly sensational" by independent experts, indicates that humanity's carbon emissions produce far less global warming than had been thought: so much so that there is no danger of producing warming beyond the IPCC upper safe limit of 2°C for many decades.

“In our project we have worked on finding out the overall effect of all known feedback mechanisms,” says project manager Terje Berntsen, who is a professor at the University of Oslo’s Department of Geosciences and a senior research fellow at the Center for International Climate and Environmental Research – Oslo (CICERO).

“We used a method that enables us to view the entire earth as one giant ‘laboratory’ where humankind has been conducting a collective experiment through our emissions of greenhouse gases and particulates, deforestation, and other activities that affect climate.”

Berntsen and his colleagues' results derive in large part from taking account of the way that global temperatures have remained flat for the last fourteen years or thereabouts, instead of climbing as they ought to have done with increased carbon levels.

“The Earth’s mean temperature rose sharply during the 1990s. This may have caused us to overestimate climate sensitivity," explains the prof.

“We are most likely witnessing natural fluctuations in the climate system – changes that can occur over several decades – and which are coming on top of a long-term warming."

At the moment levels of CO2 stand at around 395 parts per million (ppm), climbing at around 2 ppm each year and accelerating. In pre-industrial times the levels is reckoned to have been 280 ppm. Depending on various factors, the amount of atmospheric CO2 might have doubled to 560-odd ppm around the year 2050.

According to the Intergovernmental Panel on Climate Change, that would be disastrous as it would probably mean 3°C warming or more: and the IPCC considers that anything above 2°C means terrible consequences for humanity. Thus the organisation has long sought to limit atmospheric CO2 at 450 ppm, though this is regarded as a lost cause by many.

But Berntsen and his crew say that analysis is much too pessimistic. They consider that the likeliest result from doubled carbon (which would actually occur some decades after the doubled level was reached) would be just 1.9°C - within the IPCC target. According to the Research Council of Norway, the government arm which funded the new research:

When [the] researchers instead calculate a probability interval of what will occur, including observations and data up to 2010, they determine with 90% probability that global warming from a doubling of CO2 concentration would lie between 1.2°C and 2.9°C.

This maximum of 2.9°C global warming is substantially lower than many previous calculations have estimated. Thus, when the researchers factor in the observations of temperature trends from 2000 to 2010, they significantly reduce the probability of our experiencing the most dramatic climate change forecast up to now.

Other recent research has suggested warming of this sort with doubled CO2, but so far the IPCC and the warmist-alarmist community generally has been reluctant to accept the new findings. However the state of the accepted science is beginning to change, with Britain's Met Office lately revising its forecasts of warming sharply downwards.

Renowned Swedish climate boffin Caroline Leck, who was not involved in the research, commented:

“These results are truly sensational. If confirmed by other studies, this could have far-reaching impacts on efforts to achieve the political targets for climate.”

The Research Council's announcement of the new results can be read here.

The argument will still be made that carbon emissions should be reined in sooner or later, as eventually even in professor Berntsen's forecast possibly-dangerous warming might result should emissions carry on unchecked for the long term.

However, even the previous IPCC imminent doom scenario completely failed to produce any serious action (apart from some dishonest machinations which artifically force up electricity bills to pay for pointless windmills). With the recent gradual scientific acceptance - even among scientists who have spent their whole lives studying the subject - that global warming is simply much less significant than had been thought, the chance of anyone caring enough to take action is now even lower. ®