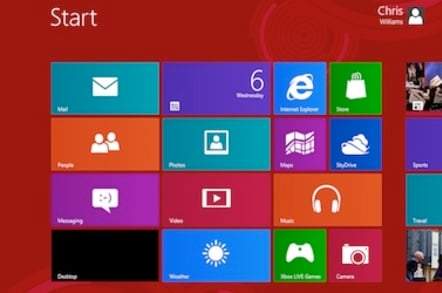 But the computer makers are fighting back: they claimed that if they’d followed Microsoft’s hardware requirements and ramped up production, they'd have ended up building a lot of high-end expensive slabs that consumers didn’t understand nor want.

The Reg has learned Microsoft provided clear and specific guidance on the hardware it wanted inside any machine running Windows 8 so as to show off and utilise the operating system's new capabilities, such as the touch-driven interface. Microsoft also gave its advice on the mix of high and low-end form-factors manufacturers should build, namely Ultrabooks, hybrids and simple laptops.

The Redmond giant had held a competition between competing computer makers, and the PCs it deemed the best were to be promoted under two labels: Hero PCs and Featured PCs. Microsoft wanted 10 Hero PCs to advertise globally and promised to pay retailers to display and promote 20 PCs on the Featured list.

However, the wheels came off that plan: Gartner said last week that during Q4 2012 Windows 8 didn’t make a “significant impact” on PC shipments and other analysts said sales of Windows 8 are lagging Windows 7.

Now Microsoft is planning to reboot its launch of Windows 8 next month. On Tuesday the company gave 9 February as the date for the US and Canada unveiling of the Intel-powered Surface Pro tablets. But sources tell us Microsoft is actually preparing for a February “relaunch” of Windows 8.

The Windows Pro Surface was planned to emerge in January, 90 days after Windows 8 and ARM-powered Windows RT Surface devices went on sale. That has clearly slipped.

“Microsoft is very frustrated with major OEMs who didn't build nearly enough touch systems and are now struggling to find parts and ramp up. Microsoft says they provided very specific guidance on what to build,” our insider said.

When new versions of Windows are released, Microsoft usually gives minimum hardware specs for the operating system to PC makers as part of its logo programmes: machines that meet the requirements get an official Redmond badge to reassure buyers. It should be stressed that these specifications are always pitched as the minimum needed to get the OS running.

You can see the Vista specs here.

Windows 8, though, was a radical departure that Microsoft had to flaunt. It introduced touchscreen input; called for apps capable of running on ARM chipsets from Qualcomm, Texas Instruments and NVIDIA; and required PC makers install firmware capable of cryptographically authorising the boot up of the operating system.

A separate source at a major Windows 8 PC maker confirmed frustration is simmering inside Microsoft, and the blame is settling on PC makers. He said [Microsoft] “is pinning the blame on the manufacturers for not having enough touch-based product”.

Next page: 'We couldn’t afford to make lots of product, lots of high-priced touch'
Page:
Tips and corrections
274 Comments