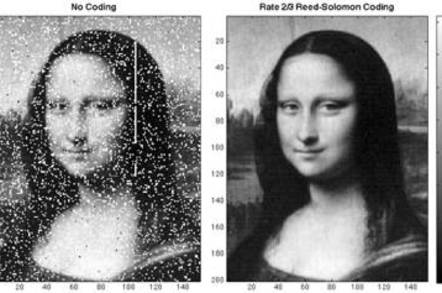 NASA has fired a greyscale image of the Mona Lisa to its Lunar Reconnaissance Orbiter, as part of an experiment using optics instead of radio for deep-space communications.

Any space-watcher knows the frustration at the delays imposed by skinny radio channels in anything involving a deep-space mission. NASA is intensely interested in getting more bandwidth between Earth and space, since that would let it fetch more data from spacecraft, along with more and higher-resolution images. 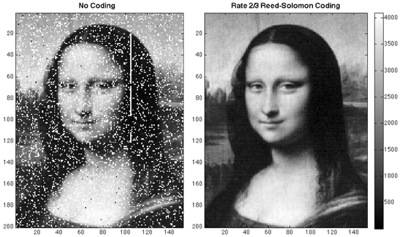 Mona Lisa, with and without error correction. Source: NASA

The next generation satellite laser ranging (NGSLR) instrument used in the experiment was built to track the Lunar Orbiter Laser Altimeter (LOLA) instrument on the orbiter. The digitized Mona Lisa piggybacked on the ranging pulses that measure the orbiter’s position.

MIT’s David Smith, principal investigator at LOLA, said that in the short term laser communications could act as a backup for the radios now used, while “in the more distant future, it may allow communication at higher data rates than present radio links can provide.”

This experiment, which sent a grey-scale Mona Lisa as an array of 152x200 pixels, only managed 300 bits/second. LOLA reconstructed the image based on the timing of the received pulses, and the spacecraft then retransmitted the image using its boring old-school radios so that earthside boffins could confirm La Gioconda made it back to earth safely.

NASS’s next laser communications experiment will be the Lunar Laser Communications Demonstration, which will try to achieve 20 Mbps transmission to the Lunar Atmosphere and Dust Environment Explorer, due to launch in May 2013.

The Earth-Moon distance achieved by this experiment is still far short of the record. In 2005, the Mercury Messenger spacecraft sent a laser message over a distance of 15 million km during an Earth fly-by.