Everyone invited to the party, except Bing... bitch 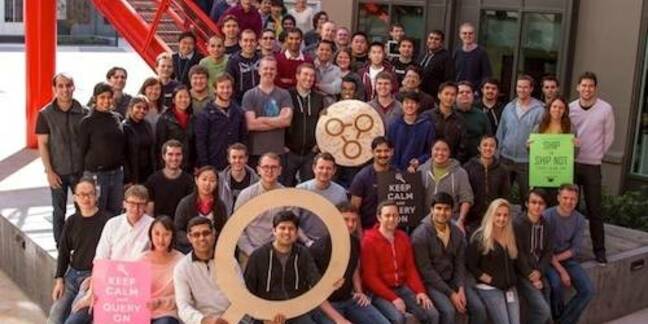 Analysis Facebook took a major step away from Microsoft on Tuesday by confirming it had built a search product for its network without any involvement from its Redmondian biz partner, which has a $240m stake in Mark Zuckerberg's ad empire.

While it remains the case that Microsoft's Bing continues to power web search on Facebook, the company has completely revamped how its users can mine for data within the site.

But instead of enlisting Microsoft's expertise to help build that function, Facebook took the entire operation in-house with a 100-strong web-developer team led by Lars Rasmussen - the man who co-created Google Maps and, er, Wave.

Your correspondent asked Zuckerberg - via the medium of a live feed from London to San Francisco - whether Microsoft had any collaboration whatsoever with the so-called Graph Search side of Facebook.

The question turned somewhat vanilla by the time it reached a Facebook flack at the event who changed the wording to: "Did Microsoft have involvement with Graph Search?"

To which Zuck responded:

But, as noted by Rasmussen, integration stops at the web search level. Bing effectively kicks in when Facebook's own querying system - which is significantly still in beta - fails to deliver the relevant results. But Microsoft's search cannot and will not ferret around within Facebook's social graph where the real ad money supposedly ultimately lies.

As for Graph Search itself, which the company is billing as the "third pillar of Facebook" standing alongside the Timeline and News Feed features, Zuck has signalled that while the initial focus was on people, places, photos and interests his outfit was now laser-focused on building its search function.

The work will take years, he said, which hints at a Microsoft-free future. It's interesting too when one considers rumours that MS wonks were attempting to offload Bing onto Facebook last year. If that story is indeed true, than it shows the level of nervousness displayed by some Redmond execs about Rasmussen's web team. "Here, don't make one yourself, have ours", one can quite easily imagine them saying.

For now, Facebook isn't interested in contributing to search within the worldwide web - Google has that one down pat. No wonder then that Zuck doesn't want to collaborate with Mountain View, even if he does insist on blaming such a frosty relationship on privacy.

We would love to work with Google. We just wanted to incorporate search, and as long as the companies are willing to honour the privacy of folks sharing content on Facebook, we'll work with them. We just haven't gotten it worked out with Google yet - Zuckerberg

What Zuck's website is instead doing right now is attempting to intelligently compute data queries within its own silo of information. To do this, it's not only relying on people to, well, like the Like button, which is the main hunting ground for advertisers, but also for them share more location details, reviews of restaurants and so on.

The ad-function-creep will naturally stretch to Facebook's search bar eventually. As Zuck explained: "This could potentially be a business over time."

I was given access to the beta - availability of which is very limited to some users of the English (US) language version - but the results for me were pretty boring. That's in part because I rarely click on 'Like' for anything in an often futile effort, frankly, to bypass much of the ad noise.

The queries being returned via Facebook's proprietary search algorithms were also pretty slow, which hints at a possible latency problem with the current infrastructure but then the software is still being developed by Rasmussen's team.

Oh, and perhaps my favourite bit about this product announcement - it was built with the help of a Unicorn. OK, that's the name of an internal information retrieval system developed by Facebook rather than the mythical horse with a horn on its head. It survived a cull of three different search tools the company had been using, according to Rasmussen in a lengthy blog post that didn't mention Microsoft's Bing once.

Arguably, Facebook is following Google's lead with its Graph Search product, given that Google+ has been around for about 18 months now. But, where Google attempted somewhat clumsily to plonk a social graph on top of its search engine, Facebook can more smoothly tuck "personalised" search into its 1-billion-strong userbase.

The question now will be whether Facebookers will have the temerity to sidestep the Like button to prevent creepy options seeping in. For example, do you really want your brother to search through his friends of friends to come up with a dating match for you? Thought not.

It's clear that Facebook is redefining how its network functions by indexing billions of search queries away from the bright lights of Google as it pursues more ad juice. And down the line, there's arguably little room for Microsoft if Facebook really is serious about doing search right. ®