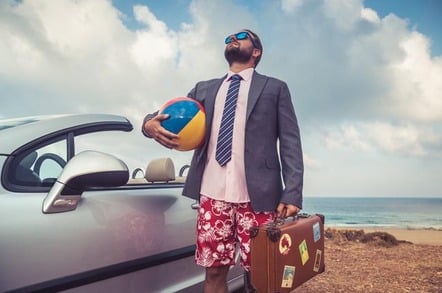 A security audit of a US critical infrastructure company last year revealed that its star developer had outsourced his own job to a Chinese subcontractor – and was spending all his work time playing around on the internet.

The firm's telecommunications supplier Verizon was called in after the company set up a basic VPN system with two-factor authentication so staff could work at home. The VPN traffic logs showed a regular series of logins to the company's main server from Shenyang, China, using the credentials of the firm's top programmer, "Bob".

"The company's IT personnel were sure that the issue had to do with some kind of zero day malware that was able to initiate VPN connections from Bob's desktop workstation via external proxy and then route that VPN traffic to China, only to be routed back to their concentrator," revealed Verizon this week. "Yes, it is a bit of a convoluted theory, and like most convoluted theories, an incorrect one."

After getting permission to study Bob's computer habits, Verizon investigators found that he had hired a software consultancy in Shenyang to do his programming work for him, and had FedExed them his two-factor authentication token so they could log into his account. He was paying them a fifth of his six-figure salary to do the work and spent the rest of his time on other activities.

The analysis of his workstation found hundreds of PDF invoices from the Chinese contractors and determined that Bob's typical work day consisted of:

9:00 a.m. – Arrive and surf Reddit for a couple of hours. Watch cat videos

The scheme worked very well for Bob. In his performance assessments by the firm's human resources department, he was the firm's top coder for many quarters and was considered expert in C, C++, Perl, Java, Ruby, PHP, and Python.

Further investigation found that the enterprising Bob had actually taken jobs with other firms and had outsourced that work too, netting him hundreds of thousands of dollars in profit as well as lots of time to hang around on internet messaging boards and checking for a new Detective Mittens video.

Bob is no longer employed by the firm. ®