Ten stars of CES 2013: Who made the biggest splash? 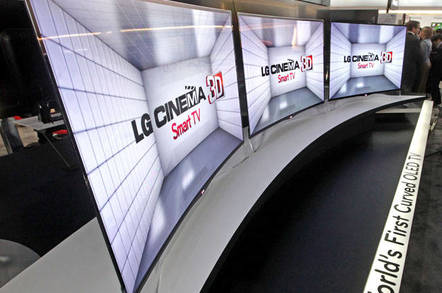 CES 2013 As the 2013 Consumer Electronics Shows (CES) wraps up in Las Vegas, we’re left to ponder whether it as was a good show this time round. In 2012, IT vendors, buoyed by Intel encouragement and marketing money, were keen to show off their first Ultrabooks. A year on, and the chip giant’s skinny laptop brand has largely failed to capture the public’s imagination, not least because of the high price attached to the machines it’s stamped upon. Windows 8 may yet push the platform forward, but many of the novel machines it has led to were unveiled well before CES.

TV makers this year admitted that they can’t sell 3D, at least not as a sole driver of new TV sales. It’s one feature among many, not a reason to buy in its own right. No wonder, then, that 3D was barely mentioned, vendors preferring to begin laying the groundwork for Ultra HD, the 4K x 2K resolution that, very expensive now, should have fallen in price to more sensible levels in three or four years time - around about the time many consumers who recently made the move to LCD will be looking to refresh their ageing set, or to upgrade to a larger screen.

There might be some content then, too, though Ultra HD sets will upscale existing HD material. And the higher resolution will make these TVs’ UIs much sharper.

Samsung and LG made a big deal out of OLED HDTVs last year - in 2013, Sony and Panasonic got involved too, pitching Ultra HDTVs using OLED technology. Samsung and LG showed off gently concave OLED panels. But OLED remains very hard to turn into a large format TV, and it seems likely that LCD will adapt to 4K x 2K faster than OLED will.

The elephant in the room, making is presence felt more than the inevitable monster TVs, was Apple. The TV industry is still waiting nervously to see whether the Cupertino company will indeed have spotted something they missed and shake up the telly business as it did with the phone industry.

Just as TV is on the verge of a new wave of product driven by the new, higher resolution, so wireless tech is about to evolve, first with 802.11ac accelerating 802.11n Wi-Fi to gigabit speeds but then with WiGig 802.11ad 60GHz to deliver very high local data rates but, more importantly perhaps, at long last a viable wireless alternative to USB 3.0, DisplayPort and HDMI. These are early days for both: ac routers are here, but computer and tablet makers need to get it into their products before it will truly take off. Since internal ac adaptors are now just starting to be combined with ad chips, WiGig may come in at the same time.

On the gadget side, smartphone-linked watches drew much attention at CES, and there was no shortage of tech toys and tat - Android-running rice cookers, and e-cutlery to make sure you’re not eating too quickly, indeed; fork off...

Car makers showed off slightly more advanced in-car systems tech, but nothing radically beyond what we’ve seen before. Perhaps we’ll see more interesting advances at next week’s Detroit motor show. Likewise, February’s Mobile World Congress (MWC) will play host to a greater number of smartphone-related launches than CES. Intel may have talked up its next-generation CPU platform, Haswell, but until it’s out, vendors aren’t able to show the kit they’ll be able to offer based on this powerful yet power miserly processor.

Now that many Windows 8 laptops sport tablet modes, either with folding-back screens or slide-away keyboards, it was inevitable that desktops would go the same way. The impact of the iPad and the pressure of Windows 8 means the PC world is going tablet, whether we like it or not. Asus showed off its take on the notion, the Transformer AiO, a Intel Core i3-based all-in-one desktop running Windows 8 on an 18.4-inch, 1920 x 1080 IPS LCD touchscreen. The novel part: said screen slips out of a dock to become an independently operating Android 4.1 Jelly Bean tablet. 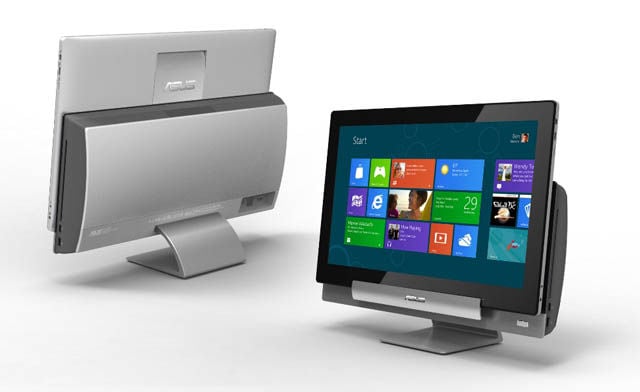 The tablet part contains its own Nvidia Tegra 3 chip, memory, storage and a battery that’s good, Asus claims, for five hours’ runtime. Not that you have to run the Android UI - Asus is bundling Splashtop software to let you view and interact with the Windows 8 session running on the base unit over a Wi-Fi link.

If there’s a flaw here, it’s that maybe 18.4 inches is more tablet than you really need, and you’re effectively paying for two machines: desktop and tablet. Still Asus reckons the basic model will ship Stateside for a not-unreasonable $1199 (£745), only a little more than a fixed-screen AIO. It’s a bit of a chunky AIO PC too, but does that really matter for a desktop? Not really.

With Samsung and LG, it’s a case, as the old song goes, of ‘anything you can do, I can do better. I can do anything better than you’. LG had a curved OLED TV on display, and - surprise, surprise - so did Samsung. Both claimed to have come up with the idea first.

The real irony, perhaps, is that having spent so long trying to persuade us to ditch CRT for LCD because flat is better than curved, these two vendors are now saying curved was the way to go all along. There’s one, crucial difference this time: these screens are concave rather than convex. 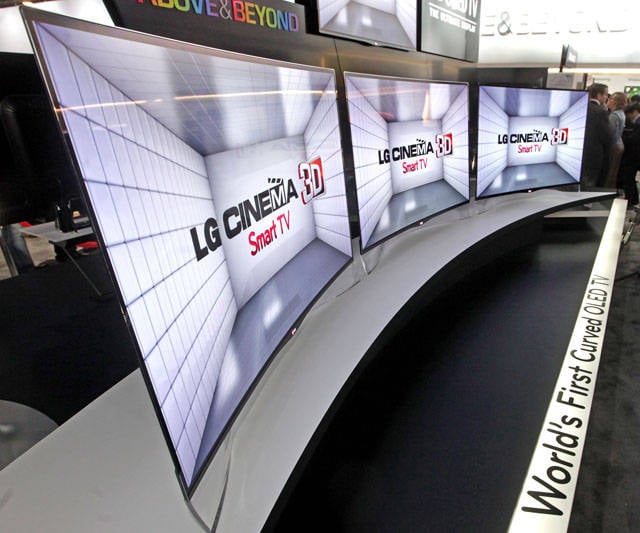 This, they say, “provides depth to the content displayed for a more life-like viewing experience... consumers will enjoy the Curved OLED TV for its immersive panorama effect, which is currently not possible with conventional flat-panel TVs. When watching captivating content such as vast landscapes and scenes from nature on the Curved OLED TV, they will feel like they are surrounded by the beautiful scenery.”

Sweeping vistas and arty photos do look good, it’s true, but enough to justify the camber? Not really, and of course neither company demo’d their sets showing ordinary telly programmes. LG, as you can see, even put a line of them side-by-side, the better to enhance the impact. Still, points to both for trying ever harder to show they can build screens better than everyone else. And each other.