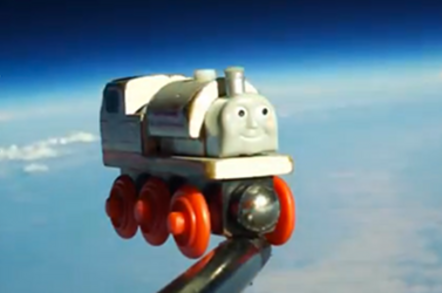 Video Toy train stories are like number 13 buses - you wait ages for one and then two turn up at once. Following our report earlier this week on wooden train outfit Bigjigs' audacious bid to run the West Coast Mainline franchise, we received news of a US dad who dispatched his young son's model locomotive to the stratosphere.

It seems world+dog is sending stuff heavenwards these days, but we're surprised Ron Fugelseth's flight last year slipped under our radar, because the resulting vid is an absolute gem.

Ron explains: "On Aug 24th 2012 we sent my son's favorite train 'Stanley' to space in a weather balloon with a HD camera and an old cell phone for GPS. He was recovered 27 miles away in a corn field. This video documents the journey from liftoff to landing."

Lovely, and it's good to see that British locomotive engineering* still has the Right Stuff. Thanks very much to reader Samuel Jackendoff for the heads-up. ®

*A quick bit of very trainspotterish research reveals Stanley is a hybrid design based on tank engines produced by Leeds manufacturers Hudswell Clarke, and Kitson.

The former firm also had a hand in another, slightly less agreeable airborne enterprise, when it built the airframes for the first operational British nuke - Blue Danube - and then the Red Beard tactical nuclear bombs.

Canada has lunar dreams as Germany worries about what lies beneath

Space roundup And in Israel, a funny thing happened on the way to the Moon