Fewer nodes and less storage, and presumably at a lower price 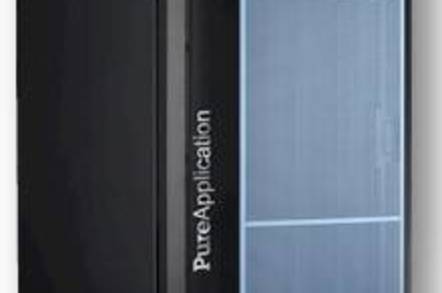 If you are looking for a low-end pre-configured, automated, application-ready cloud in a box but you don't need a big behemoth of a machine, then IBM finally has a configuration of its PureApplication systems that might be appealing to you.

Everybody wants to peddle pre-configured, automated, application-ready systems. At Oracle these are Exa boxes and, if you want to be generous, Sparc SuperClusters. At Hewlett-Packard they are CloudSystems. At Dell they were vStarts and now they are Active System 800s. And at Big Blue, they are PureSystems.

None of these are appropriately named, of course. They are trying to be Application Systems, of course, and the only problem is that IBM already took that name in 1988 with its venerable Application System/400, a preconfigured app box with an integrated relational database that eventually had 275,000 customers and generated well over $5bn in revenues a year at its peak.

It is not entirely clear what makes any IBM system "pure," that part of the naming convention was never explained, as if things didn't have to make sense. I don't think IBM's top brass get it, either.

The System/360 was so named because it spanned a range from small to large systems and ran various operating systems and types of workloads, a 360 degree view of everything in your data center. (In theory, at least.) Good names are supposed to mean something, and it is not simply as matter of people not making sense anymore and they did in the past.

Netflix tells you exactly what it does, Google tells you exactly how much data it covers, and so on. I don't understand what PureSystems, the raw infrastructure cloud setup, means, and I don't know what PureApplication, which is akin to an AS/400 as reconstituted from x86 servers and integrated switches and storage to run Windows and Linux applications, means. (I guess everyone else is selling impure systems to Big Blue's way of thinking, er, marketing.)

I do understand that Flex System, the underlying hardware chassis for the Pure boxes, was meant to convey that the machine was integrated and flexible at the same time, allowing multiple kinds and sizes of server nodes and switching to be slid in.

So much for the philosophy. In a tersely worded announcement this week, IBM is offering two new configurations of the PureApplication W1500 system that was launched in April 2012. The original PureApplication W1500 machines, which started shipping at the end of July last year, were pretty heavily configured:

It is hard to see what kind of value these PureApplication machines offer compared to alternatives, since IBM has not published pricing for them.

What IBM does say is that its DB2 database and WebSphere application server are pre-installed on these clusters, which run Red Hat Enterprise Linux, and its "patterns of expertise" automation for installing software can be used to automagically deploy hundreds of other systems and application software packages on the cluster.

Say what you will about Oracle, but the system configuration and list prices are out there. You know where to start on the bargaining. ®