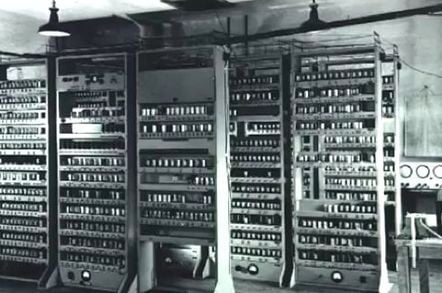 Physical production of a replica of EDSAC, aka the Electronic Delay Storage Automatic Calculator, has at last begun at The National Museum of Computing, located at World War II crypto centre Bletchley Park. EDSAC is an early computer originally put together at Cambridge University in the late 1940s.

The initial work on the replica focused on punching out 20 chassis units based on the three that survive from the original EDSAC’s 140, each home to a selection of the computer’s 3,000-odd thermionic valves. These helped it process up to 650 instructions per second, not many by today’s standards, but two orders of magnitude more than the electromechanical computers that preceded it.

“Over the past year we have researched EDSAC’s design and original construction, so this week marks the exciting transition from research to production,” said Andrew Herbert, the EDSAC reconstruction project lead. “With this important step accomplished we are confident that we can complete the daunting task of replicating EDSAC as it was in 1949."

The machine was designed in 1947 by Maurice Wilkes (1913-2010) after his appointment two years previously as the second director of what was then called the University of Cambridge Mathematical Laboratory. Wilkes’ team took their lead from John von Neumann’s plan for an electronic computer called EDVAC (Electronic Discrete Variable Automatic Computer), itself an evolution of ENIAC (Electronic Numerical Integrator And Computer), the machine built by John Mauchly and J. Presper Eckert of the University of Pennsylvania at the behest of the US Army.

EDSAC, which occupied a space 5 x 5 x 2m, ran its first program on 6 May 1949 and was used for the following nine years. . It formed the basis for LEO (Lyons Electronic Office) built for the Lyons food company and widely regarded as the world’s first business computer. In 1958, having been succeeded by EDSAC 2, EDSAC was dismantled.

The goal of the reconstruction project - which was launched two years ago this Friday and is backed by likes of the Computer Conservation Society, Acorn co-founder Hermann Hauser and Google UK - is to have a working replica of EDSAC up and running by March 2015. ®