Miniature wooden rolling stock will deliver excellent service, no delays and seats for all

We offer the Vulture Central tip of the hat today to toy train outfit Bigjigs for its audacious bid to run the UK's West Coast Mainline rail franchise.

For those of you not up to speed on the West Coast Mainline fiasco, entertain yourselves with this blow-by-blow account down at the Beeb as to how the nation that invented the railway was reduced to stumping up a substantial wad of taxpayers' wonga for the benefit of watching a privatised three-ring rail circus.

Mercifully for long-suffering passengers, there is now hope that neither FirstGroup nor Virgin will finally grasp control of the franchise. Back in October, Bigjigs made its pitch to the Department for Transport: 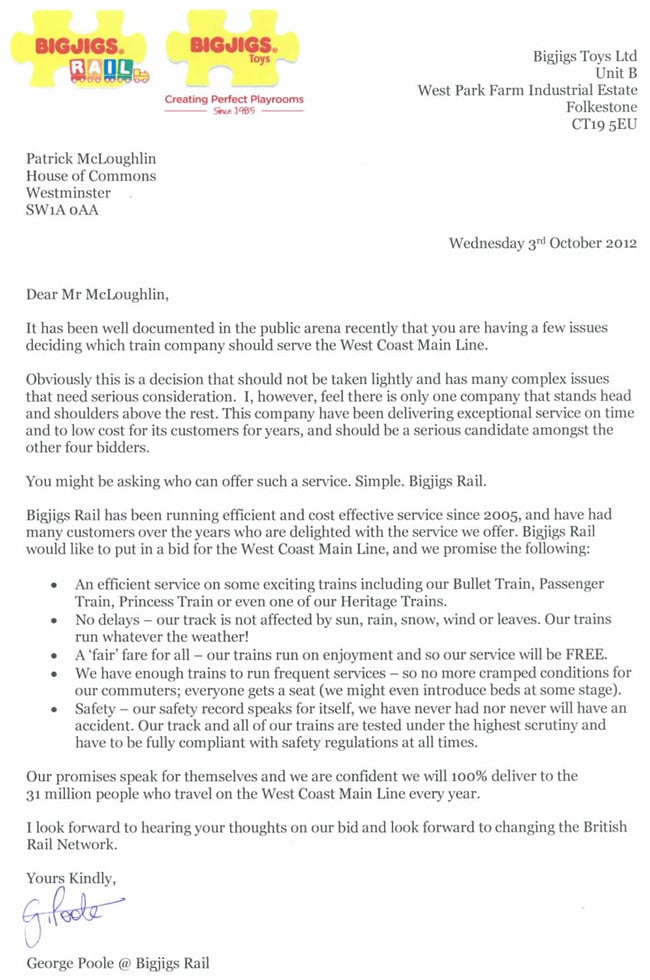 Well, we invite readers to raise a pint to the DfT for this response:

Superb. Bigjigs says it is "going to make a few minor changes to the bid and resubmit it", so watch this space to see if a proper railway company can create order out of the West Coast Mainline chaos. ®

Cancelled in Crawley? At least your train has free Wi-Fi now, right?

Why your connection is as slow as the service itself

It's all voluntary, the human overseer could be miles away. What could go wrong?