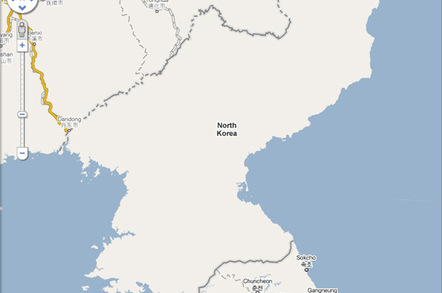 Vid Just popped a Wii U under the tree? You poor, poor fool: this Christmas your kids won't clamour for Nintendo's latest, the thumb candy they really want is "Pyongyang Racer", the very first North Korean Computer game!

We make that assertion because the in-browser Pyongyang Racer is, at the time of writing, down. Servers at Koryo Tours, an organisation that arranges visits to North Korea, seems to be experiencing server problems as westerners rush to enjoy the tour of downtown Pyongyang and its magnificent monuments the game offers.

The name “Racer” is something of a misnoner – those who've made it onto the server report it doesn't offer an actual race, but as you'll see from the video below players are instructed to collect fuel lest they run out and are forced to end the game.

The game was developed by Nosotek, a company that bills itself as “the first western IT venture in DPRK (North Korea)” and says its "software engineers are selected from the mathematics elite and learn programming from the ground-up, such as assembler to C#, but also Linux kernel and Visual Basic macros.

After assessing Pyongyang Racer, Vulture South feels Nosotek's team of 50 coders could also knock out a decent game for the Sega Master System.

A colossal business process outsourcing industry on India's scale can only be a year or two away, surely? ®